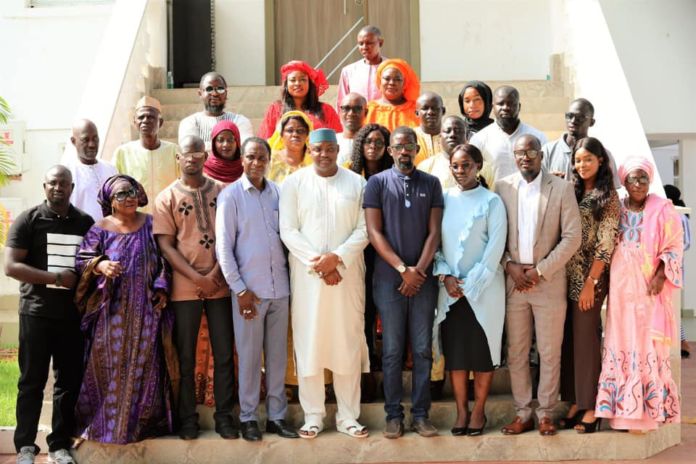 Officials of Team Bakary Badjie on Saturday met with President Adama Barrow at State House where they pledged their support to the Gambian leader on his plan to remain in office until 2021.

President Barrow came to power in 2016 after promising to be in office for only three years but he has had a change of heart and will now remain in office until 2021.

Gambians have been divided over whether Mr Barrow should remain in office, with many claiming the president is trying to cling to power.

But on Saturday, the local executive committee of Team Bakary Badjie that managed and supported the campaign for the ‘Bakary Badjie for KMC Mayor’ held a meeting with the President Barrow, with the three years issue featuring prominently.

A statement signed by Bakary Badjie said: “The meeting centered on the growing political polarization and other issues impeding peaceful coexistence and advancement of our beloved country, The Gambia.

“Nyima Saidy, Campaign Manager and Matarr Saine’s remarks focused on the history, core values, objectives and activities of Team Bakary Badjie before and after the local government elections. The speakers took turns acknowledging the daunting challenges confronting the government as it tries to steer the affairs of the country forward. Dabakh Malick and Bakary Badjie (who address the meeting via phone call) assured the President and his government of their support in actualizing the national development plan particularly priority areas 3 and 7 which focuses on fisheries, agriculture and youth empowerment.

“The team also called on His Excellency Adama Barrow to avail young people of The Gambia the resources and opportunities to be proactive players in the political and economic development of our country through support to the sporting, entertainment and trade sectors.

“The controversial issue of “Three Years Jotna” was also considered in the discussion. Speakers from ‘Team Bakary Badjie’ understand the controversy surrounding the coalition’s 3 years agreement in relation to Barrow’s term. As per the constitution, the team concedes to the directive of the supreme law of the land and resolved that Barrow should be allowed to serve a five-year mandate as a democratically elected president. The team conveyed to the gathering that while we support citizen’s right to peaceful protest, we will not participate in any riot or forceful removal of a democratically elected President.

“President Barrow in his statement thanked Team Bakary Badjie for taking the initiative to meet him. He also expressed his commitment and readiness to work with the team on our common goals for a better Gambia.

“We want to make it clear that contrary to misconceptions out there. The team’s meeting with President Barrow did not stem from any ulterior motives but a normal engagement of proactive citizens that are willing to lend a hand to development goals of a sitting President to create a better Gambia for all. This we have done with not just President Barrow but other key players in our polity. As enshrined in our national anthem: “We pledge our firm allegiance. Our promise we renew. Keep us great God of nations. To The Gambia ever true.”