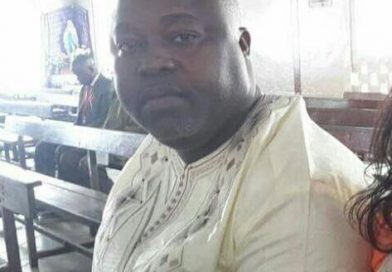 Information reaching The Fatu Network has it that the former NIA Deputy Director General, Louis Gomez may have died as a result of the solitary confinement he was placed in at the Maximum Security Wing of the Mile 2 Central Prisons in Banjul.

Gomez, who suffers from hypertension, diabetes and a heart condition was reportedly locked up and sealed with his colleagues for almost 36 days at the Maximum Security Wing.

Abdou Jambarr added that on Thursday, October 11, the late Louis Gomez was taken to the prison infirmary (clinic).

“Louis could barely walked, he was supported by some prisoners who took him to the main yard,” Abdou told The Fatu Network.

He added that an hour later Louis started gasping seriously but there was no medic to help him. It was so unbearable that a convict, Matarr Jaw has to put him in a wheelchair and pushed him to the prison infirmary. He was moved from the wheelchair and placed in the ambulance and rushed to the hospital by medic officer Sainey Touray.

“By the time they left the Mile 2 Prisons, Louis Gomez was already dead,” he said.

It has been reported that when news of Louis Gomez’s demise reached the former NIA Director General, Yankuba Badjie, he fell into a state of shock, lying on his bed unable to utter a word.

Babucarr Sallah, an NIA operative allegedly fell in his cell and fainted.

Abdou Jambarr added that none of the former NIA officials were officially informed about the death of their colleague.

“They received the news on GRTS when the press release from the Interior Ministry was read on there.”

According to prison sources, by Monday, October 8, Louis Gomez’s condition worsened as his whole body was reportedly swollen such that he could not even wear his shoes. His eyes were also said to have turned green. One convicted prisoner allegedly warned SPO Njirane Nyane to take Louis Gomez to EFST Hospital. It is said that Yankuba Badjie also gave a similar advise but the officer paid no heed.

Alhagie Nyambi, another remand prisoner said that none of the officers attached to the prison infirmary have any formal medical training.

Nyambi said the former NIA officials were moved to the Maximum Security Wing after the prison revolt by some remand prisoners who complained of long detention period without trial. He noted that the NIA officials were not part of the revolt because the issues raised by the protesters does not affect them.

This prison source revealed that Sergeant Kadiri Jobarteh of the prisons riot squad was the one who relocated Yankuba Badjie and Louis Gomez to solitary confinement to be later joined by their colleagues.

“Louis Gomez reminded Sergeant Jobarteh that he was suffering from a heart problem, coupled with chronic diabetes and hypertension, and that being moved to a solitary cell was not medically viable for him,” Nyambi told The Fatu Network.

The same concerns were raised by Yankuba Badjie who told Sergeant Jobarteh that Louis Gomez’s health condition is known to the Mile 2 medical personnel.

He added that Sergeant Jobarteh then assured them that they will not be sealed, and that they will be allowed outside until lockdown time in the evening.

“When we got to the Maximum Security Wing, we noticed that Yankuba Badjie and Louis Gomez were locked up and sealed in their individual solitary cells. We could see them through the door holes sweating profusely,”

Nyambi said they were heralded to different cell blocks, Saihou Omar Jeng, Lamin Lang Sanyang and Babucarr Sallah were taken to cell block five together with Yankuba Badjie while Haruna Susso while Tamba Mansireh and Lamin Darboe joined Louis Gomez in cell block four. He explained that the officers were jubilating with laughter.

“Whether you are a director or not we don’t care. We tamed Generals here. Go and asked General Lang Tombong Tamba. We turned him into a woman here”

He added, “We were kept in solitary confinement for 22 hours everyday in a 1.7 metre by 2 metre cell. We spent 36 days under those conditions until the court ordered for our returned to Remand Wing.”

Nyambi said some of them have developed health complications during their incarceration at the Maximum Security Wing.

Friday, October 5, Saihou Omar Jeng was referred to The EFST Hospital where he was admitted for 5 days.

However, there are complaints that the detained former NIA officials have been treated with utter disdain and disrespect by prison officials. It is said that their properties and provisions are usually blocked.

Both Abdou Jambarr and Alhagie Nyambi gave detail accounts of the prison revolt that took place on September 3, 2018. Both men say protesters were complaining about long periods of detention while some of them spent 4 to 5 years in prison. They took up some prison guards as hostages with demands to meet government authorities.

Abdou and Alhagie added that the former NIA boss, Yankuba Badjie asked his colleagues to remained in cells since the issues raised does not affect them for they are going to court three times a week.

Although, the prison authorities were with believes that the former NIA officials fueled the protest which they strongly denied.

Abdou said he heard the ring leaders had meetings with government officials including the National Security Adviser, Momodou Badjie.

He disclosed that the next morning, Tuesday, September 4, over two dozen prison riot squad and general duty officers armed with riot gears led by RSM Lamin Sanneh stormed the Remand Wing. Abdou said he overheard them shouting and yelling obscenities such as:

“Yesterday was your day, but today is our day”

They reportedly opened the cells and ordered prisoners to come out one after the other. Then the riot squad officers started hitting, kicking and lashing out at prisoners.

“They handpicked some prisoners they said were part of the previous day protest, handcuffed and took them out of the Remand Wing where they were put in iron legs cuffs,” Abdou Jambarr explained.

He added, “They pounced on them and started beating them severely while pouring water on them.”

Many of the prisoners, he said suffered from serious injuries and were bleeding profusely.

“All these were ordered and witnessed by RSM Lamin Sanneh, SPO Njirane Nyane and Sergeant Kadiri Jobarteh,” he said.

Alhagie Nyambi also reported that prisoners breakfast, cereals, provisions, canned beefs, sardines and cigarettes and medication were stuffed into sacks and taken away. He added that the tortured prisoners were locked up and sealed at the Maximum Security Wing.

The suspected ring leaders of the protest were put in vehicles and transported to Jeshwang Prison Camp where the officers allegedly boasted they had “Bambadinka Cell”.

Meanwhile, the names Abdou Jambarr and Alhagie Nyambi are code names to protect the identities of the sources.