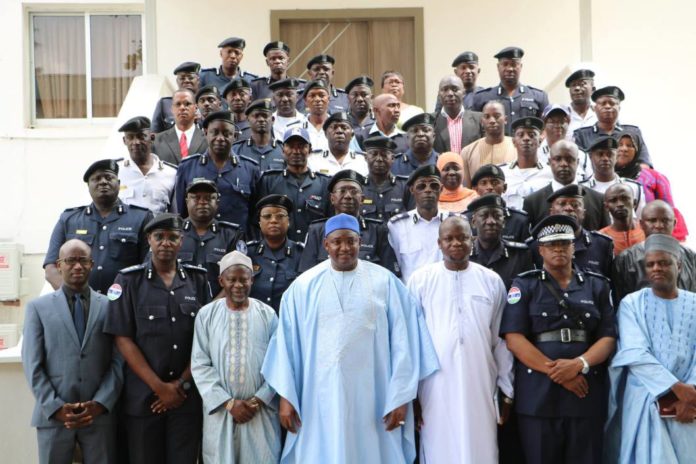 Since assuming office in January 2017, President Barrow has initiated wide-ranging institutional reforms posed to restore Gambia’s image as the human rights capital of Africa. A key component of this reform agenda is the Security Sector Reform (SSR). Launched in August 2017, the SSR aims at “overhauling” the Gambia’s security apparatus in line with democratic norms and practices. Already, series of activities including an SSR assessment was conducted in late 2017, which identified many gaps and malfunctions including the lack of updated legal and policy frameworks to guide security sector governance as well as the over ballooned size of the security sector, particularly the military. Currently, there is an ongoing process to draft a National Security Policy, which will provide the general framework for security governance in the next few years. There are also internal reform processes initiated by various security organs in response to the broader SSR process. All these developments seek to ensure that the security sector is under democratic civilian control with full respect for human rights, the rule of law and good governance and are vital to consolidate democracy in the Gambia. However, recent political rhetoric from President Barrow has the potential to undermine the process.

In his statement during the launch of the Security Sector Reform project, President Barrow advanced that when his administration was sworn in, “it was clear to us that we were taking over a security sector that had been deeply politicized and not responsive to the needs of our people.” In August this year, president Barrow announced in a press conference that the size of the Gambia Armed Forces would be downsized as part of the SSR process. Similarly, in his last press conference (September 2018), when asked about the snail pace of the SSR process, he announced that an audit has been initiated to check the records of how people were recruited into the army, arguing that the system was polluted for the past two decades. What such statements do at best is to raise more questions and thereby alienate people from the process. They also suggest Barrow lacks understanding of our security needs and at worst his reform agenda is emotionally charge. For the SSR to be effectively implemented, it must be void of political sentiments, locally owned and driven, without which, it will be an exercise in futility; just another tick in the box.

In a recent meeting with the visiting AU Chairperson, H. E. Moussa Faki Mahamat, Barrow, while calling for AU’s support to keep the ECOWAS Military Intervention in the Gambia (ECOMIG) until 2021, moved from “downsizing” to “rightsizing” the security sector as earlier suggested. These two terms although similar, have different meanings and consequences. Downsizing simply put, means to cut down the size of the security sector to make it smaller, while rightsizing involves cutting down from one sector to supplement another. For instance, the SSR assessment report states that the security sector, particularly the military was oversized. Rightsizing would mean moving some of the men to other security institutions that might need more personnel and those not needed, retrenched.

Whether rightsize or downsize, what is evident is that President Barrow’s government is bent on cutting down the number of security personnel in response to budgetary constraints as well as his conviction that the security sector particularly the military was polluted by the previous regime. Paradoxically, while the political goal is to right or downsize, Barrow’s government has reinstated a number of personnel back to the military some of whom were away for over decades. If the goal from the onset was to cut down on numbers, why then were others reinstated? The potential challenge here is that any attempt to cut down others might be seen as malicious and/or targeted.

Generally, Gambians agree that there is need for urgent reforms in all institutions, particularly the security sector. However, it is imperative to move beyond political rhetoric hinged on Jammeh’s legacy and thoroughly engage in genuine reform void of politics. What is clear on the side of Barrow, especially following his recent call to extend the ECOMIG’s mandate is that he does not trust the Gambian military yet. The lack of trust has less to do with the possibility of the military, particularly the so-called Jammeh loyalist destabilizing the country, but more about Barrow’s perceived threat to his position and insecurity. Barrow must understand and be reminded that the Gambia Armed Forces despite all its challenges continue to be a trusted and needed institution in this country and is composed of sons and daughters of our land. The military during the political impasse demonstrated to Gambians their impartiality by allowing the will of the Gambian people to prevail. Barrow should, therefore, desist from all forms of rhetoric that might suggest otherwise and rather rally all Gambians to support them as we all seek to enhance their capacities and functions as a national institution that represent our sovereignty and independence.