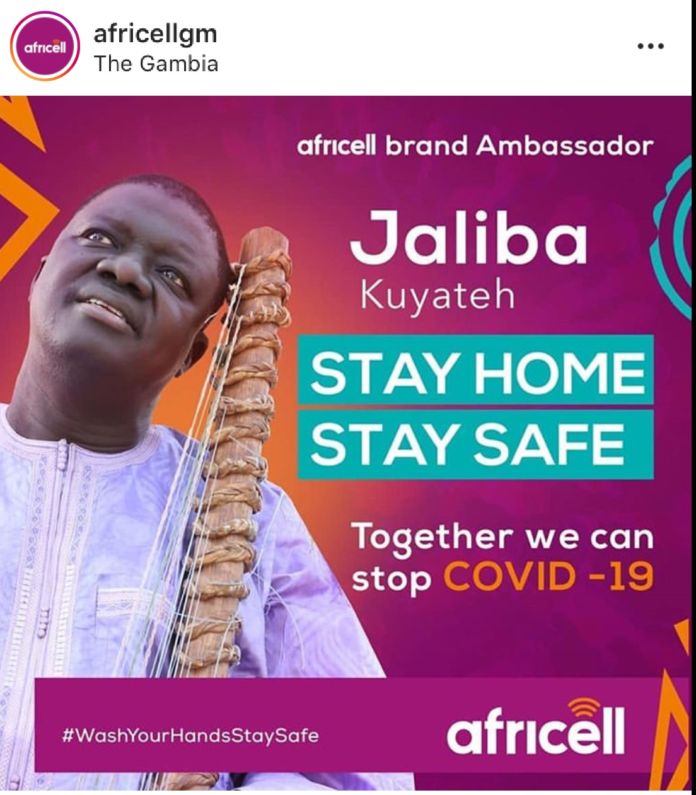 Call him the King of Kora, Kora Maestro or what you may; you can never go wrong with accolades for Jaliba Kuyateh and his prowess in the matter of the 21-stringed instrument that can pride itself as the repository and transmitter of everything that is great, rich and beautiful in the history of the people of Manding.

Truly Jaliba Kuyateh is to kora music what Pele is to football and Bob Marley to Reggae. In these trying times of the COVID-19 Pandemic and its consequent infodemic, I thought of Jaliba and what role he could play to alleviate our pain and help us contain this plague. Without fail, he delivered with panache; releasing a great song on the Coronavirus, produced with patronage from telecoms giant Africell.

With a soothing tune, Jaliba delivers a message of precaution as well as assurance in Mandingka, Wolof and English. I received the song from a social media contact with the celebratory caption “Jaliba has done it again!”

And that is true because this is not the first time that Jaliba would rise to the occasion when the country and the subregion needed authentic information, reassurance and hope regarding a global challenge. Is there a better conveyor of the message than our own man singing in our own languages? Truly God tells us that he never sends a messenger to a people but that the message would be delivered through their own native language.

Jaliba had made this same proactive move regarding the deterioration of our environment when he delivered a masterpiece called “Conservation”, predating former US Vice President Al-Gore’s hit movie “An inconvenient Truth” by more than a decade. When the Aids virus hit the world with its huge toll on the human race, Jaliba Kuyateh was at the forefront with a song that warned the people about that menace and advised them to take the right precautions.

His song, Telefood, is one of his best I ever listened to and he has composed many other songs loaded with useful information and inspiring lyrics that teach people and elevate their spirits. In a letter to former Information Minister, Sheriff Bojang, I dwelled a bit on this song and the theme is still relevant in these days of COVID-19-related food challenges:

The fusion of trumpet, drum, balafong, and kora, inundating my mind as I savour his track Telefood; he cries to the world to help feed the hungry and further urging us to boost agricultural production for food security. Now, my good friend, I have heard you talk of how much you adore Buju Banton’s funky beat “women stop go ‘round” more than a 100 times, but this track of Jali’s is my answer to that one for I shall listen to this a 1000 times over and not stop.

As the world gradually heads for a lockdown and our own government toys with the idea of a full quarter of a year as duration for a State of Emergency, you might want to get some songs of the King of Kora for information, entertainment and motivation.

If you are a Gambian/African in the diaspora, then take a daily dose of his laudatory song for those working in the West, hustling to support their families back home.  In the track, “Semester” Jaliba helps fuse meaning into the toiling and moiling abroad.

As I pen these lines, I am relishing his classic he did in praise of my uncle Nfansu Sonko of Busumbala. Next on my play list is his history-loaded track he did for former National Assembly member of my home region, Sabach Sanjal, Kebba Lang Camara; a song I have listened to for more that two decades and ended up using it as soundtrack for my movie “Jangi Jollof”, The Gambia’s first biopic, inspired by my first book of the same title, a memoir on The Gambia’s First University Programme.

Do not forget to listen to Jaliba’s song of gratitude for his patrons titled “itele taamu nti” where he serenades the likes of my good sister Ida Ndure and my friend Latiff Suwareh.

As you endure your lockdown period, do not forget to listen to Jaliba’s own favourite of all his songs called “Tereto” where he reminds humanity about the inevitability of death and the day of Judgement. Truly this song resonates in these days of the coronavirus; the lockdown we are facing with flights and most vehicles grounded is viewed as part recompense for our overexploitation of the environment of which Jaliba warned us many decades ago. We are partly reaping some of our own reward for what we sowed in our natural as well as sociological environment.

Jaliba’s old songs, done with the Kora as the only instrument, are my favourite tracks and in one of those classics, he does a lecture on health, focusing on prevention rather than a curative approach to healthcare. I wish our governments, from Jawara down to Barrow, took heed of the maestro’s advice. Do not miss his song for the King of Albert market in Banjul, Salifu Jaiteh for that one has a great beat too.

And finally, as The Gambia mourns the passing of one of the most illustrious sons of our country, O.B. Conateh (Fisco), please do not forget to listen to the track done for him by Jaliba. The erstwhile head of our national football federation who doubled as entrepreneur in the fisheries sector and philanthropist, received great praise from Jaliba in a song encrusted with great chorus that resonates well today: “Gambia mbay leh nyanta duwaa laa yeh; O.B. Fisco Conateh.”