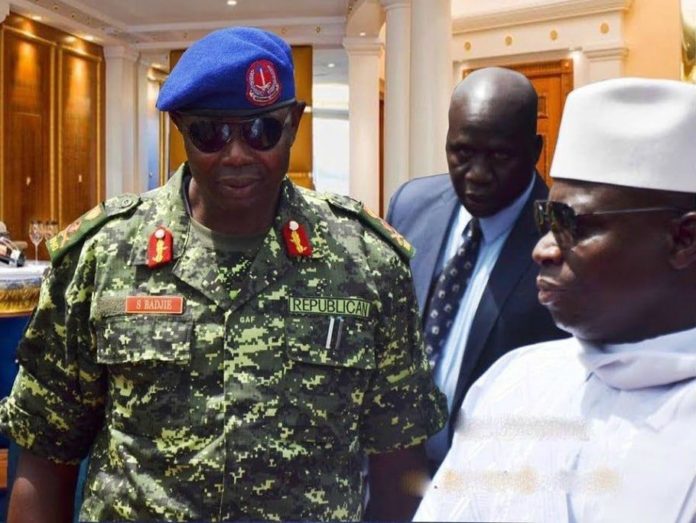 Captain Bubacarr Bah of the Gambia Armed Forces on Tuesday told the TRRC he was given instructions by Saul Badge to plant bombs at the Gambia National Petroleum Company.

Saul Badjie is a former Gambian army general who fled The Gambia for Equatorial Guinea with ex-president Jammeh.

“Saul Badjie told me that the coalition members are bent on revenge and vengeance. He (Saul Badjie) gave me tasks to plant explosives at the GNPC and they will put the blame on them (coalition). He is a foolish man,” he said.

Bah said they were receiving ‘hazardous’ instructions from Saul Badjie during the political impasse and that they were told to build fighting positions across the greater Banjul area.

He said: “I told my officers that I am not going to follow this man (Yahya Jammeh) because he has been here for 22 years and Gambians have voted him out.”

However, he explained his arrest and detention during the political impasse that he was arrested with Captain Demba Baldeh at Fajara Barracks after his commanding officer colonel Essa Tamba called for meeting ordering him to tell other officers not to come with their weapons to the meeting.

He added he later heard vehicles roaring and later some military police from State House came and entered forcefully into the house they were holding the meeting led by Lieutenant Nuha Williams.

He said he and Captain Demba Baldeh were taken to the NIA headquarters in Banjul where they found another officers – Major Sidi Joof, Major Yusupha Jammeh, adding he was kept with the other officers until ex-president Jammeh left the country for exile into Equatorial Guinea.