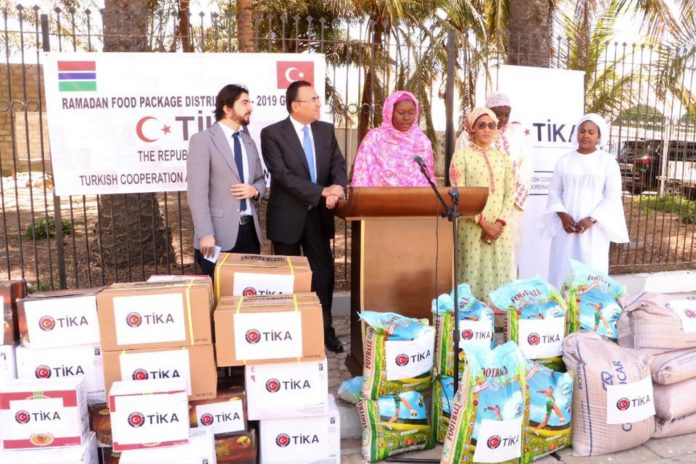 First Lady, Fatou Bah- Barrow presided over the presentation of about 8 tonnes of food items to the Fatoumatta Bah Barrow Foundation (FaBB) donated by the Turkish Cooperation Coordination Agency (TIKA), on Thursday, May 23, 2019.

The donated food items which included rice, sugar, cooking oil, dates, among others, were given to the First Lady’s foundation for onward distribution to organizations like Tanka-Tanka Psychiatric Hospital and the prisons.

Acting CEO of the FaBB Foundation, Ms. Fatou Ceesay spoke on behalf of First Lady Bah Barrow, describing TIKA as a true partner and thanked its officials for coming to complement the work of the foundation in giving support to the needy.

In his opening remarks, TIKA’s new Country Representative, Mr. Mohmet Akif Eyigum said they were happy to entrust FaBB Foundation with the donated food items for onward distribution to needy people. The main objective of TIKA, he said, is to extend helping hand to countries in need by providing technical and development assistance.

“Furthermore, I will like to thank the FaBB Foundation for such a wonderful initiative of supporting the less privilege in society in the holy month of Ramadan’’, Mr. Akif Eyigum said. ‘’This initiative is no doubt in line with TIKA’s objective of improving the welfare of vulnerable people in partner countries and strengthening bilateral relations between Turkey and The Gambia”.

Turkish Ambassador to The Gambia, Mr. Ismael Yusuf said the donation was timely, coming at a very good period in the Ramadan. He described TIKA’s humanitarian gesture as a noble cause, stating that over a thousand packages of food items will be going to the needy people in the coming days. A lot more will be distributed through other institutions.

The ambassador said Turkey is committed to the development agenda of The Gambia. As First Lady’s foundation is playing an important role in the humanitarian services to the country, Turkey will continue to support the work that FaBB does.