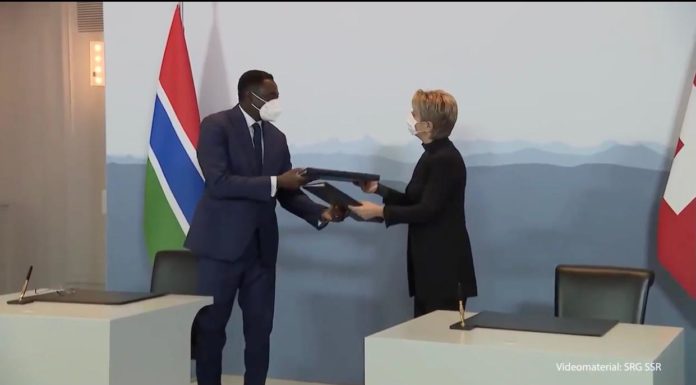 Switzerland has said ‘operational’ cooperation with The Gambia over returning citizens generally works well, as the country announced the signing of two deals with The Gambia.

On 12 January Federal Councillor Ignazio Cassis, as vice president of the Federal Council, and Federal Councillor Karin Keller-Sutter signed two cooperation agreements – on civil aviation and on migration – during the official visit to Bern by a delegation from the Republic of The Gambia, headed by Vice President Isatou Touray, according to a press release found on the federal council website.

The press release said: “The agreement on migration allows Switzerland and The Gambia to strengthen their respective efforts in fighting illegal migration.

“Ms Keller-Sutter and Gambian Vice President Isatou Touray and his delegation discussed migration issues and the way in which the two countries can strengthen their cooperation. Approved by the Federal Council on 7 October 2020, the agreement signed at this occasion opens up new opportunities for cooperation between Switzerland and the Republic of The Gambia in the field of migration.

“Many Gambian citizens are leaving their country for other countries in the region, Europe or the United States. Gambian nationals account for a significant proportion of migrants crossing the Mediterranean each year to reach the Italian or Spanish coasts. After a peak in 2016, the number of asylum applications from Gambian nationals in Switzerland has since fallen sharply.

“Faced with these challenges, the State Secretariat for Migration (SEM) intends to continue to support the Gambian authorities in handling migration, not least by helping to implement projects locally. So far, SEM has organised ad hoc training to enable The Gambia to increase its capacities and is supporting a project with the International Organization for Migration (IOM) in response to the COVID-19 pandemic.

“Operational cooperation with The Gambia over returning citizens generally works well. The agreement covers issues relating to the practical organisation of returnees, such as identification and the issuing of replacement documents. Switzerland has so far concluded eight similar migration cooperation agreements with countries on the African continent, among them Angola, Cameroon, Benin and Tunisia. These are in addition to the 56 other agreements on return migration that Switzerland has concluded.”

The foreign ministry is yet to respond to requests for comment.