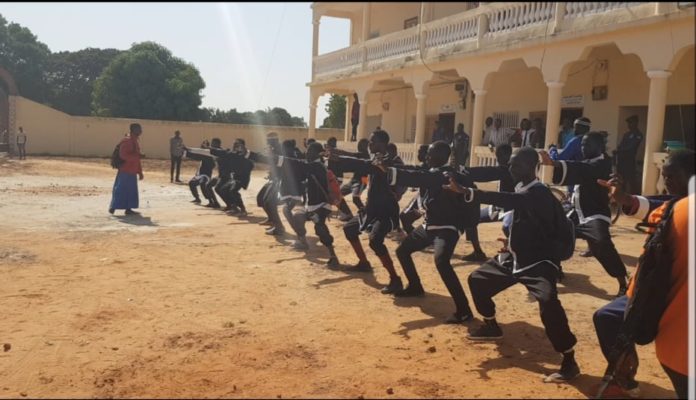 Islamic Enlightenment Society Iskaat has issued a statement charging haters of Islam are the ones behind claims terrorism lifestyle is being inculcated in young Gambian Islamic men.

Various claims flooded social media following a video of young men seeking knowledge in Islam taking part in martial arts session. The men had provide security to the country’s imams during their congress this past weekend when they converged to show off their fighting skills.

Iskaat in a statement on Tuesday responded to those claiming terrorism in other countries started in the form of gathering young men and teaching them how to fight.

The group said: “Martial arts kung-fu is a well known ancient art that instills discipline, calmness, personal security, peace, and respect in people. It is the right of any Gambian citizen to learn Kung-fu or any disciplinary art. What does martial art events in the Gambia have to do with religious extremism or violence?.

“In fact, this event was held at the Supreme Islāmic Council’s headquarter, and our elders were entertained after they concluded their congress. Hence, they are indirectly accusing the Islamic council of training or encouraging potential terrorists. These assertions are absurd and disgraceful. Martial art is not a new phenomenon in Islamic schools. Amongst the first black-belt holders in the Gambia are Arabic students.

“The likes of 𝐒𝐡𝐞𝐢𝐤𝐡 𝐊𝐚𝐛𝐚𝐚, happens to be the first person to open a center for martial-art in the Gambia. He was remarkably assigned to train our soldiers and other non-Islamic institutions. Over the years, not once did we hear about extremism from him or the copious number of Gambians who were trained under him. The cultural norms of 𝐂𝐡𝐢𝐧𝐚 and 𝐉𝐚𝐩𝐚𝐧 are strongly intertwined with martial arts. Yet, these respective countries only gain benefits from the art. The many around the world today were initially exposed to Asian cultures because of martial arts.

“It is rather unfortunate, that these islamophobic sentiments are coming from those who zealously hates Islam, and the ignorant Muslims amongst them who fear there own religion, in a nation that constitutes 96% Muslims.

“Should Democracy in The 𝐆𝐚𝐦𝐛𝐢𝐚 only be limited to few?. No Gambian, irrespective of tribe, religion, or race should be marginalized. The freedom of speech and expression of any Gambian will not be compromised by online opinions. Orthodox or practicing Gambian Muslims should not be discouraged to pursue any profession or sports they desire in their own country.

“It is important to note that those that have taken up arms against our country since independence (from kukoi to the December 30th attackers) are all western educated Gambians. The enemies of Islam are indeed eager for violence to spring from the Islamic schools in this country, and Inshaa’Allah this will never happen.

“Islam is a peaceful way of life that deals with all aspects of society. This beautiful religion will continue to spread undeterred Inshaa’Allah. Preserving a peaceful Gambia is a responsibility of all Gambians, especially our online media that feeds us information. We can argue and disagree with reasoning and respect, but let us not blackmail and formulate lies that cannot be substantiated. We ask Allah (Subhanalah wa Taalah) to continue to bless our beloved nation and preserve its people.”