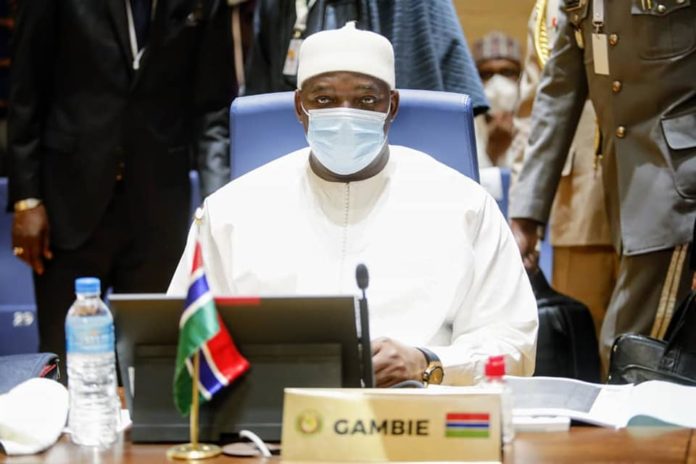 Ever since my first assertion that President Adama Barrow of the Gambia could be clinically dyslexic, I have been adamant on it and trying to confirm my suspicion by collecting and studying all his video speeches in English delivered at home and abroad. I am however finding it very difficult to get the one at the 57th session of the ECOWAS heads of state held at the capital city of the Republic of Niger, Niamey, September 7 to 9, 2020. I was hoping to at least find it at the Gambia-Statehouse Facebook wall where such important events are usually carried; however other than his ceremonial departure from the Gambia, arrival at Niamey, reception at the conference hall, shown in the presidential group picture wearing blue face mask and his final departure after the meeting, nothing of the video-speech was posted. I have also been asking around but yet to find someone to tell me where it can be found. The voice I heard reading some parts of it was not Barrow’s but of some reporter who really seem to understand what he was reading about.

Whereas I do not attribute dyslexia to any lack of intelligence but could instead affect highly intelligent people, I nevertheless remain consistent in my conviction that a dyslexic person has no business being a head of state. It’s like voting a naturally blind or deaf person as president. In the same way a blind and deaf leader would have faced the stumbling block of not seeing or hearing the jurisdiction he/she controls, equally so would a dyslexic head of state be rendered ineffective in carrying his or her duties that requires good reading and comprehension skills. And unless our president is medically proven otherwise I will continue to make this argument no matter what.

Yes, his written speech at the ECOWAS meeting has been shared with every media outlet which doesn’t remotely look like something he can ever write although it highlights one attention-catching issue about the extension of the mandate of ECOMIG in the Gambia that should concern every Gambian.

We all know that the extension request from Barrow was just a formality, because President Mackey Sall, in a trip to France last week was mainly to ask the French government for the funds with a new false narrative that the Gambia is still going through an unstable democratization process for “four God darn years”. Always portraying us as knuckleheads who know no better. For a proof, our president will frequently be exhibited as a classic example of who Gambians are emotionally and intellectually.

Of course, France is very happy with their chief sub-regional puppet Mackey over his firm grip of the Gambia through Adama Barrow, “his brother from another mother” and will keep on financing the troops with endless promises about why it will only serve their Neo-colonial interest.

That could somehow be right but financing the troops also serves the economic interest of the Senegalese army constituting the bulk of the foreign soldiers in the country . In these difficult times they are making a lot of money out of the fraud by rotating contingents in a mission whose termination could cause unpredictable financial difficulties to their over-bloated Armed Forces. Talking about Security-Sector Reform, I even think Senegal now needs it more than the Gambia.

Remember how the so-called ongoing Security-Sector-Reform used to be the only excuse for keeping the troops in the Gambia? With no end in sight of that hopeless reform, they are now including the expected destabilization of the nation from the implementation of the TRRC recommendations. What kind of fools do these people think we are with all these infantile stories?

I don’t know about the rest of you, but looking at the magnitude of the racket, I will not at all be surprised with another justification in the next six months of how they must stay “to ensure that the Gambia’s presidential election is freely and fairly conducted” when their primary objective will be to help their desired candidate rig the polls. France will of course be deceived into always sending the checks to Dakar.

To our liberation strugglers still mulling over their delusion of owning the strategy that voted out the APRC government for a greater and better regime but will never find the honesty of admitting that their hard-fought victory was long ago usurped by France and Senegal, I have another bad news for you. The Senegalese occupation force and political control of the Gambia is here to stay and they will do whatever it takes to perpetuate an NPP government with their preferable leader, President Adama Barrow in charge whom they will sponsor to victory in 2021.

And for the opposition parties forming and hoping to defeat Barrow next year without addressing the destructive Senegalese dominance, I wish to say tough luck to all of you buddies. Other than the APRC assuring the Gambians an immediate expulsion of these useless foreign troops under an illegal arrangement, I hear no party leader discussing what to do with them after victory in 2021. Some, I understand are entertaining clandestine plans of maintaining the same relationship with Senegal and to keep their troops around for lack of trust of our security forces which to me sounds very foolish because Senegal, as far as a Gambian leader is concern, is perfectly satisfied with Barrow’s caliber and collaboration. Any other contender may be too risky for Mackey Sall to choose over his “brother”. So far everything Sall wants for Senegal and France can be achieved through President Adama Barrow whose valuable position of never questioning anything from Dakar is a treasure trove of unspeakable proportion. Why then another Gambian leader especially a smart one who will not want to only appreciate his good meals, join free flights wherever he is ordered to go, enjoy his siestas at international conferences, hide from the press and struggle to read speeches he is coached to regurgitate without understanding their contents? Historically, they have learnt in Presidents Dawda Jawara and Yahya Jammeh that any Gambian chosen for their agenda different from the disposition of “Adama Barrow” is doomed to fail.

Ordinarily, President Barrow should have been the new ECOWAS chairman for having at least another year in office instead of President Nana Akufo-Addo of Ghana who faces the probability of being voted out of office in their next presidential election due in December, 2020. Although I am rooting in for his reelection.

But I guess after catching a glimpse of our well-fed president seemingly doing what he does best in conference halls, napping in style, they disregarded all the odds and settled for Nana.

In fact his inability to properly read and understand the English language is my only interest to listen to his speech at the Niamey-ECOWAS conference whether by video or audio. I will appreciate anyone knowing where to find the whole speech to please let me know. The recording should be at the GRTS and should have as expected been played for the public by now. But did they? If not, why?

And please spare me the nonsense that our president was merely luckier than others to be elected or that the position was a preordained gift he has received from the Almighty God. I don’t believe in either jive. The job is a responsibility requiring the best performer and certainly a challenge not for infirm minds or clueless notables.

All notable leaders at Niamey, including invalid Muhammadu Buhari of Nigeria protested against their irrational counterparts, urging them to respect their constitutional two-terms tenure in office, the hottest global topic affecting Mackey Sall’s fellow French puppets, namely Ouattara and Conde of Ivory Coast and Guinea Conakry respectively. The idiotic practice endorsed by their French masters is now the major cause of national instability to so-called African democracies, likened to coup d’etats and rebellions. Why was Barrow silent on the issue? Did Mackey Sall warn him not to comment on the subject, lest he withdraws his troops that “is stopping the Gambian population from forcing him out of the Statehouse”?

Just for those who didn’t know ,that was exactly how Abdou Joof used to blackmail Sir Dawda Jawara about the importance of the Confederation forces in the Gambia from 1981 to 1989 with Kukoi Samba Sanyang being the boogyman always waiting in the periphery. Jawara at the time didn’t understand that the longer the foreign troops stayed in his country, the harder to replace them when they leave until it was too late. Can’t any of Barrow’s advisers, politicians or technocrats enlighten him about this? Only dumb leaders will depend on foreign forces for their national security.