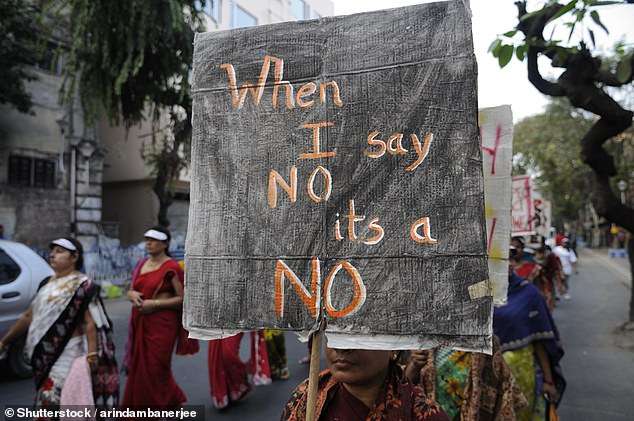 A traumatised woman set herself on fire after her father sold her for £100 to a ‘keeper’ who gang-raped her with his friends.

The victim, who is in her late 20s, resorted to the extreme measure after she was reportedly turned away by Uttar Pradesh (UP) police in India.

She is fighting for her life in Ghaziabad hospital, near Delhi, after suffering 80 per cent burns.

A shocking video of the woman from Hapur emerged on social media, where she told of her ordeal and blamed police for not taking action.

She allegedly reported the crime to Hapur SP as well as other senior officials after she as sold following her husband’s death.

But she said they ignored the complaint and took no further action – so she tried to kill herself on April 28.

Delhi Commission for Women Chairman Swati Maliwal wrote to UP Chief Minister Yogi Adityanath saying the woman had ‘suffered intolerable abuse at the hand of the UP police’ which led to her attempted suicide.

She asked Mr Adityanath to launch an investigation into police conduct.

Her letter read: ‘The Delhi Commission for Women is in receipt of a representation from a survivor of gang-rape belonging to Hapur,’ according to the Times Of India.

‘The survivor has suffered unimaginable harassment at the hands of the UP Police in Hapur who have refused to register an FIR despite repeated complaints.

‘This insensitivity and shameful conduct of the UP Police compelled the survivor to immolate herself.’

Ms Maliwal also wrote that the victim’s ‘owner’ had taken loans from a number of people in Hapur, forcing the woman to work as a domestic helper in return.

She said the woman had been abused and gang-raped at these houses.

The activist and politician said Adityanath should compensate the victim.

Police hit back at Ms Maliwal’s claims, saying senior officials did not turn her away but added that an investigation was being conducted.

Officials also registered a first information report against 14 men for the alleged rape but have not made any arrests. (DAILYMAIL)