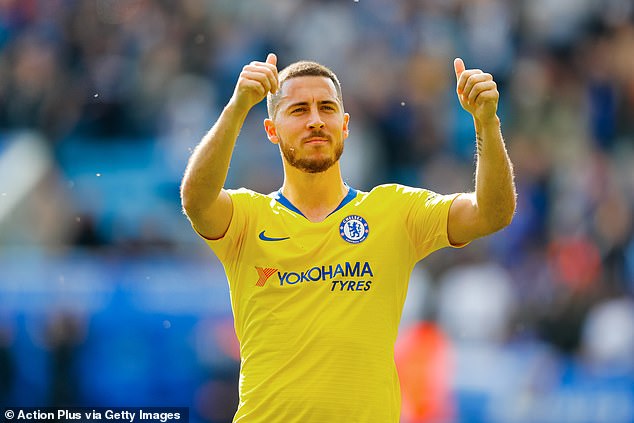 Eden Hazard will be officially unveiled as a Real Madrid player after Chelsea play their Europa League final against Arsenal on May 29, according to reports in France.

Real have been linked with a move for Hazard all season, and are said to have all but finalised a €100million (£86m) deal for the forward.

Hazard has fuelled speculation suggesting he would link up with Real manager Zinedine Zidane at the Bernabeu all season by refusing commit his future to Chelsea.

Now L’Equipe report that an agreement for the 28-year-old was done weeks ago, but will only be made public once the Blues’ season officially ends.

That will come in Baku on May 29, when Chelsea face Arsenal in an all-London encounter and one of two all-Premier League European finals this season.

Hazard has been the brightest spark in an uneven season for Chelsea, where fans have often expressed displeasure at manager Maurizio Sarri’s selections and football style.

Despite this, Chelsea finished third in the Premier League to qualify for the Champions League, and have reached two major cup finals.

Hazard has only a year left on his Stamford Bridge contract and has not shown any inclination to sign a new deal with the club.

As a result Chelsea are set to cash in on the Belgian despite his importance to the team and their imminent two-window transfer ban for breaking rules over the signing of under-18 players.

Hazard scored 16 goals in 37 Premier League appearances last season. He also provided 15 assists, the most in the league, and was awarded the play maker trophy on Sunday after Chelsea’s 0-0 draw at Leicester City.

After the game, Hazard revealed he had informed the club of his desire to leave for Real this summer.

He said: ‘I have made my decision but it is not just about me. I told the club a couple of weeks ago. I wanted it to be cleared up earlier but that’s not happened. I’m still waiting, like the fans are waiting.’