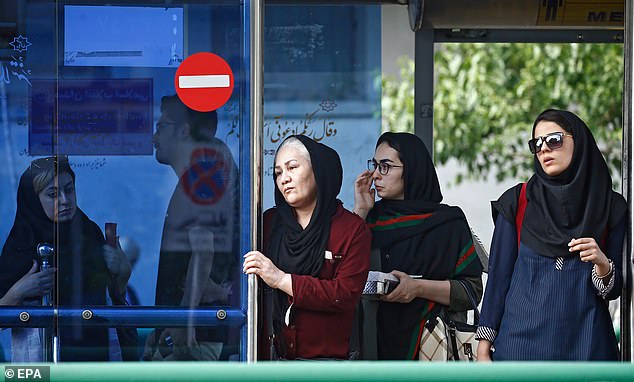 Men in Iran have been ordered not to look at women during Ramadan as part of a crackdown on freedoms by the regime amid US sanctions and civil unrest.

The country’s judiciary announced that anyone eating in public during the fasting period or playing music on their car radio would also be arrested.

‘My personal advice to women is to respect the hijab even more than before and gentlemen must avoid looking directly at female passersby,’ Gholam- Hossein Esmaili, a judiciary spokesperson said.

‘Anyone ignoring these instructions during the Ramadan will be committing an offence and should expect some punishment from the law enforcement units.’

It comes as the country’s morality police launch an investigation into ‘disturbing’ social media videos of schoolgirls dancing to a pop song.

Iran’s Education minister Mohammad Bathaei said a team of specialists were hunting down the source of the video, which showed smiling children taking part in an online dance challenge.

‘The enemy is trying different ways to create anxiety among the people including by spreading these disturbing videos,’ Bathaei said.

‘I’m certain there’s some kind of political plot behind the publication of these devious clips in schools.’

The video showed young children – and some of their teachers – dancing to the song Gentleman by US-Iranian rapper Sasy.

Hardline conservative parliamentarians have called for the headteachers of the schools to be sacked.

Ayatollah Abbas Ka’bi, a member of the Iran’s Guardian Council of the Constitution, said the videos were fuelling ‘the enemy’s cultural war’ against Iran.