“I Was Seven Months Pregnant When My Husband Was Abducted,” A Jammeh Victim 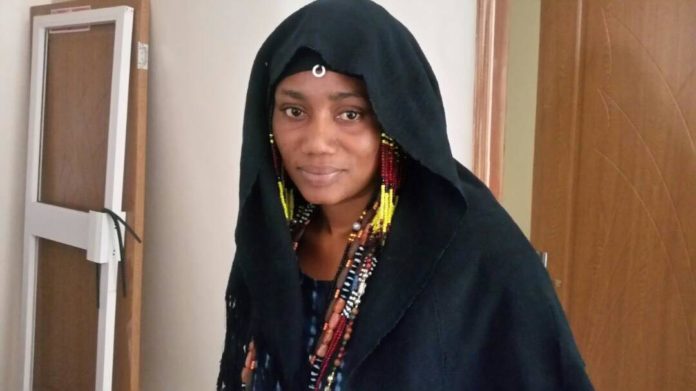 Ms Adama Conteh, widow of the late Lamin Tunkara, a Gambian national who was allegedly murdered with approximately 50–56 Ghanaians said she was seven months pregnant when her late husband was abducted by the former President Yahya Jammeh.

“My husband was abducted in 2005 when I was seven months pregnant,” said young Adama Conteh.

The young widow who was speaking at a press conference held at the Victims Centre, broke into tears while explaining the abduction of her late husband. She narrated that he was first taken to the Police Headquarters in Banjul where he spent about 3 to 4 days and was later transferred to the Kairaba Police Station before his disappearance. She started sobbing and could not explained anymore.

There are reports of another Gambian, one Edrisa Njie said to be also abducted with the Ghananians making the total number of the Gambian victims to two.

Ms Ayesha Jammeh of the Victims Centre speaking on the ‘New Evidence’ in 2005 killings of West African migrants explained her trip to Ghana where they had meetings with the families of victims, The Ghanian President and Civil Society Groups.

“All they want is justice for their families,” Ayesha Jammeh said.

She described their meeting with the Ghanian President as successful, saying he was very interested in the case as he was the country’s Foreign Minister at the time.

“Having Yahya Jammeh prosecuted by Ghana is a step for The Gambia,” Ayesha added.

Ms Marion Volkmann, Human Rights Lawyer who worked on several Commissions of Inquiry including the trial of Habre, former Chadian President said it is better to have the former President Jammeh in Ghanaian Prisons than living in a Palace at Equatorial Guinea until the Gambian case is fully ready to extradite him.

Mr Madi Jobarteh, TANGO– Advocacy Coordinator of the #Jammeh2Justice Campaign said he is part of the campaign to bring the former President Jammeh to justice.

“We have a responsibility to heal the soul of our nation,” Madi Jobarteh said.

“Every Gambian irrespective of our profession have a responsibility to cleanse the dreadful reputation, name and soul of The Gambia,” he added.

Jobarteh revealed that the former President
Yahya Jammeh is currently living in a Palace at Equatorial Guinea which he said is not his rightful place. He calls on the Gambia government to support the Ghanaian government in their effort to bring Yahya Jammeh to justice.

The activist further called on the Gambian media to get to the bottom of things rather than only relying the revelations of Human Rights Watch.