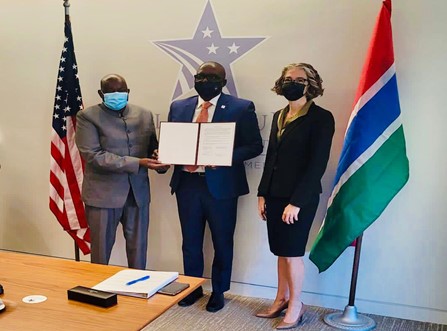 The Gambian Government has signed a grant for an electricity supply project to the tune of $25 Million. According to The Gambia’s Ambassador to the United States of America, His Excellency Dawda Docka Fadera who led the negotiation efforts that culminated into the signing of the grant, the amount is expected to increase the access rate of electricity supply throughout the country.

The project was signed between the Government of The Gambia and the Millennium Challenge Corporation’s (MCC) Board of Directors of the Government of the United States on Tuesday 16th November 2021 in Washington D.C.

The programme is made up of two components. First, a governance reform project which aims to develop a more effective, accountable and transparent power sector governance in The Gambia. A second, an operational project which seeks to improve the country’s capability to operate The Gambia’s Power System in a manner that reduces the frequency and duration of outages.

Speaking at the ceremony in Washington D.C, The Gambia’s Ambassador to the United States of America, His Excellency Dawda Docka Fadera, commended the Government and people of the United States of America for supporting the implementation of what he described as policy reforms crucial to tackling constraints that impede economic growth in The Gambia.

Ambassador Fadera observed that the assistance comes at a time when the Government of The Gambia is working strenuously to meet Universal Access to electricity by 2025.

Addressing the occasion from Banjul through video conferencing, the US Ambassador to The Gambia, His Excellency Richard C. Paschall, thanked Ambassador Fadera and described him as a great ally who has been working with the US to deepen and broaden ties between the two countries. Ambassador Paschall used the opportunity to assure the Gambian delegation that the US would remain a firm and steadfast friend of The Gambia.

The occasion was graced by the Honourable Ministers of Petroleum and Energy and Finance and Economic Affairs, Honourable Fafa Sanyang and Honourable Mambury Njie respectively.