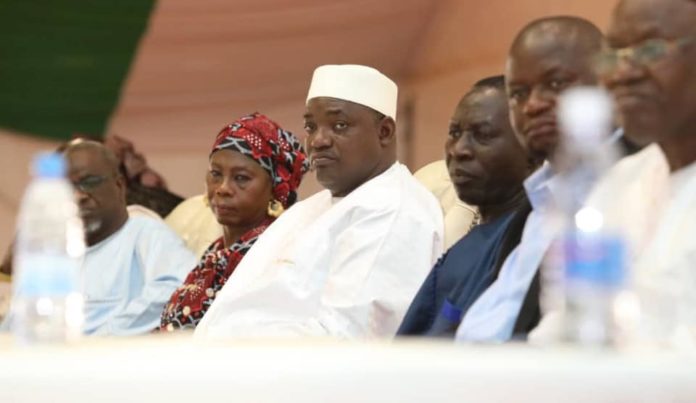 President Adama Barrow has assured that no part or region of the country will be marginalized so long he is president.

The President stated this at the weekend as he met with thousands of supporters from across the West Coast Region.

The people of West Coast Region Sunday afternoon met with President Barrow at State House meant to express their support to him.

A press release by the Office of the President said the people of West Coast Region came out in an “unprecedented way” to send an unequivocal message that they are fully behind President Barrow and his development agenda.

Addressing the crowd, President Barrow assumed his rightful role as the Unifier-In-Chief of the country highlighting that being the president of the republic he is responsible for the welfare and wellbeing of all and sundry, irrespective of ethnolinguistic, regional or political affiliations.

‘’In the spirit of national reconciliation and social cohesion, and aware of the fact that I am everyone’s president, I wish to tell the people of Foni that they are part of my family. I will never overlook you or anyone for development simply because you are not with me’’.

President Barrow expressed optimism for the future of the country assuring that his government is on track to bring groundbreaking development projects that would significantly impact the lives of ordinary Gambians. He called for the people to rally behind his development agenda indicating that the time for politics was long gone.

The president could not hide his feelings expressing delight at the massive crowd from the most influential geopolitical entity in the country. At a time when political parties are convening statutory congresses, the president unapologetically declared, to much rupture and applause, that: ‘’this is my congress, and I am sure no congress would be bigger’’.

The delegates, who spoke on behalf of the region, assured the President of their unconditional support, pointing out that they came to the meeting on their own volition. They used the opportunity to highlight their development needs calling for the intervention of the government in various areas to expand electricity supply in various communities that are not connected, clean drinking water and feeder roads to ease communication.