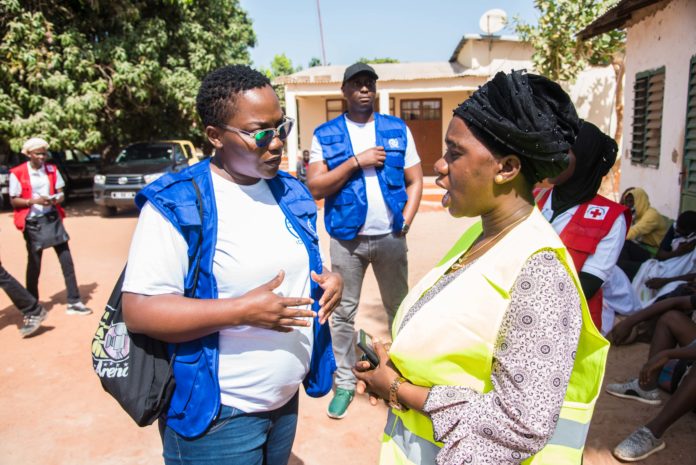 Giboro– In an effort to empower authorities to effectively respond to large-scale population movements, the International Organization for Migration (IOM) and the National Disaster Management Agency (NDMA) organized the first ever crisis simulation exercise along the Gambian-Senegalese border. 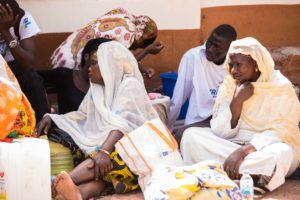 80 volunteers from The Gambia Red Cross Society (GRCS) simulated the migrants and first responders, with various state and nonstate actors called to the scene. Key to the simulation was the interaction between immigration, security, health and social welfare authorities to register arrivals, provide medical and psychosocial support and establish evacuation and shelter plans.

“Although it was good that we were able to control the situation in the border post early, we need to improve the coordination between all apparatuses” commented Edrisa Manneh, GRCS’ Volunteer Management Coordinator, in reflection of the exercise. 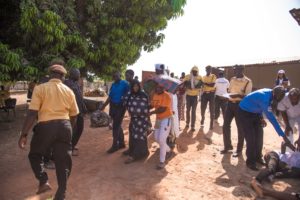 The exercise was meant to model the border turmoil brought by the political tension of 2016, in which over 45,000 Gambians fled to Senegal, as well as a 2011 upsurge of violence in Casamance, in which the region received 700 additional Senegalese asylum seekers, adding to the almost 8,000 in The Gambia.

“In 2016, we realized that West Coast is at the receiving point of movement between The Gambia and Senegal,” remarked Binta Sey, Secretary-General of the Regional Disaster Management Committee, highlighting the significance of emergency preparedness in the region. “In any crisis involving migration, Giboro bears the load more than any other town,” echoed Modou Jallow, community youth leader.

The exercise was preceded by a four-day workshop, where the committee updated its contingency plan, identifying population movement as one of the region’s top five hazards. The exercise was also followed by a debriefing with all stakeholders to document lessons learned. One key aim was to incorporate the Guidelines to Protect Migrants in Countries Experiencing Conflict or Natural Disaster (MICIC)into the region’s contingency plan. IOM introduced the MICIC Guidelines to The Gambia in 2018 through a series of trainings. “You are successfully working together to increase the capacity of first responders to properly react in times of crises,” commended Carl Paschall, Ambassador of the US to The Gambia, at the workshop.

This initiative forms part of the Africa Regional Migration Program. Funded by the United States Bureau of Population, Refugees and Migration and implemented in West and Central Africa, the project aims to build the capacities of state and nonstate actors to assist vulnerable migrants. Now on its third phase in The Gambia, the project adds disaster management to ongoing work in migrant protection and counter-trafficking.