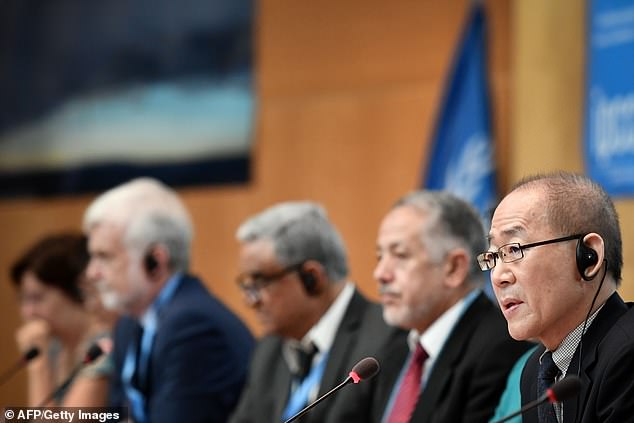 Eating less meat could help save planet, a landmark United Nations report on climate change and land use suggests.

Switching to a diet centred around vegetables rather than meat would preserve land from over farming and cut greenhouse gas emissions, experts say.

Trade-offs between securing food supplies or cooling the planet will have to be made if action to combat climate change isn’t taken now, the report recommends.

The United Nation’s Intergovernmental Panel on Climate Change met to discuss the land use report during their 50th session.

It was held in the headquarters of the World Meteorological Organization in Geneva from August 2 – 6.

‘This is a perfect storm,’ said Dave Reay, professor of carbon management at the University of Edinburgh of the report.

‘Limited land, an expanding human population, and all wrapped in a suffocating blanket of climate emergency.’

Intensive farming processes have allowed the global population to more than triple in the last 100 years, but have come with a cost, the report warns.

This increasing land use has led to more soil erosion, more rapid desertification and a reduction in the amount of organic material stored in the ground.

The report calls for big changes to farming and eating habits, but stopped short of explicitly advocating going meat-free.

This could potentially cut 0.7–8.0 gigatonnes a year of CO2 equivalent, the United Nations’ Intergovernmental Panel on Climate Change (IPCC) said in the report.

‘Delaying action … could result in some irreversible impacts on some ecosystems,’ the report said.

In the longer term, it added, this ‘has the potential to lead to substantial additional emissions from ecosystems that would accelerate global warming.’

The report should help to guide governments meeting later this year at a conference in Chile on ways to implement the 2015 Paris Agreement and avoid runaway climate change. (DailyMail)