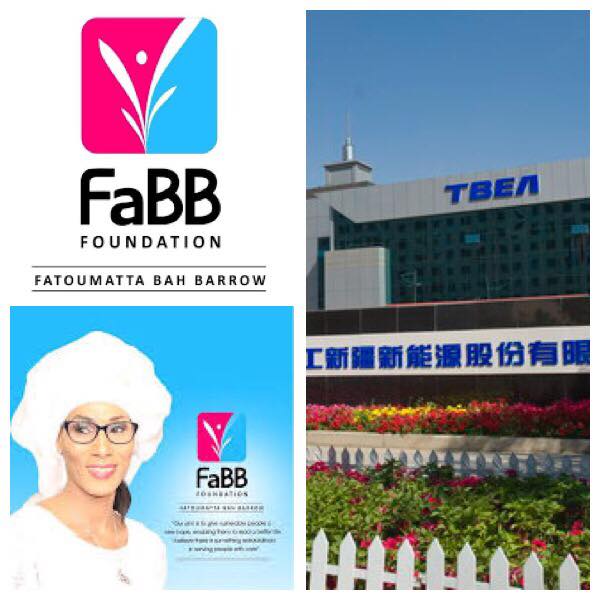 Following leaked transactions of a deposit of $752, 594.42 into the accounts of The Fatoumata Bah Barrow Foundation by TBEA Co., Ltd, a Chinese manufacturer of power transformers and a developer of transmission projects, Gambians both at home and abroad are demanding for investigations into the matter.

The transaction was made on December 18, 2017, into the Guaranty Trust bank account (GT Bank) of The First Lady Fatoumata Bah Barrow Foundation. On the same day The foundation made a bank transfer of $746,211.13 to White Airways, a Portuguese charter airline headquartered in Porto Salvo, Oeiras. The purpose of the transfer according to the telex report was to hire a flight to China where the money originated from.

Whether that was the flight that took President Barrow and his delegation to China on Tuesday, December 19, 2017 a day after the transfer was made to White Airways is the question on the lips of many.

It could be recalled that President Barrow visited China on December 19-26 2017 as special guest of Chinese President, Xi Jinping.

When contacted to shed light on the issue, the acting CEO of The Fatoumata Bah Barrow Foundation, Fatou Ceesay told The Fatu Network that the issue is being investigated at board level.

‘Well, first we do not know how the money was transferred into our accounts but we are investigating the matter at board level’. Fatou Ceesay told The Fatu Network.

An observer wondered how such a thing could happen. ‘

Through our investigations, The Fatu Network gathered that The Gambia Government through the Ministry of Energy and The National Water & Electricity Comapany (NAWEC) are on the verge of giving the transmission and distribution project of the country to TBEA Company Ltd, the company that put $752,594.42 into the bank account of The First Lady’s Foundation.

‘We are at the final stages of scrutinizing the project proposal sent to us by TBEA, Company LTD to make sure everything is fine before they are awarded the contract’. An official at the ministry of Energy told The Fatu Network. The official added that once awarded the contract, TBEA will work on the transmission and distribution networks for Soma to Basse and the north bank region including Laminkoto and the Diabugu area.

The project is funded by the world bank, the European Union and The Chinese Government.

The Ministry of Energy received proposals from TBEA and Power China but the latter is said to be more specialized in power generation meaning the contract is likely to go to TBEA Company Ltd.

An internet search led us to an article by Eurasianet in Kyrgyzstan where the same company, TBEA, previously known as Tebian Electric Apparatus was contracted to build the Datka-Kemin high-voltage power line, which joined power grids in the north and south of Kyrgyzstan in 2015. According to the article, out of seven legislators, only one was apposed to the deal in 2013. He was quoted as saying that the rest of the legislators were bribed.

“This was a scam from the get-go. This company worked the MPs, brought them over to China. Our MPs went there, toured Hong Kong, stayed in five-star hotels, received presents,” Abdyrakhmanov said. “Anywhere else in the world you would call this bribery.

Reacting to the story, Banka Manneh, a Gambian based in The US said:

‘This report about the Fatou Bah Barrow Foundation is part of a pattern of abuse of power currently underway in The Gambia, and this is a very disturbing development. President Barrow must act swiftly to reign in his friends and associates both in and outside government – we cannot afford these daily barrage of bad news regarding misbehaviors, that are to a large extent criminal, by these elements. But then again, who knows – maybe he is privy to all of them.”

Meanwhile, Gambians are eargerly waiting for the foundation to complete its investigations so as to answer the questions on the minds of many.