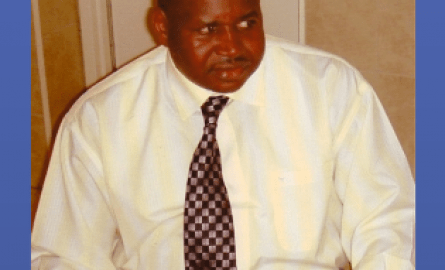 Government spokesperson Ebrima Sankareh said Friday the Gambia government has struck an agreement with Germany to temporarily halt the deportation of Gambians from Germany.

Sankareh stated this in a statement he signed and sent to news media organisations including The Fatu Network on Friday.

Sankareh said: “Following intense diplomatic negotiations regarding the plight of thousands of Gambians facing potential mass deportations from across Europe, The Government of President Adama Barrow has imposed a moratorium on repatriations pending further negotiations with our European partners.

“After a frank and amicable meeting; first between the German Ambassador Stephen Roken and the Interior minister, Mr. Ebrima Mballow and later between Ambassador Roken and Gambian vice President H. E. Ousainou Darboe, witnessed by senior officials of the Gambian Foreign Ministry on Wednesday, The Gambia government agreed with Germany to halt the planned mass deportations while better and more humane modalities are worked out. Meanwhile, Government is meeting visiting senior British officials on Monday and will be sending a correspondence to our Spanish, Italian, British and Austrian allies formerly informing them of the moratarium on pending repatriations.

“During the discussions, vice President Darboe responding to wild allegations of complicity in the ongoing repatriation of Gambians, made it categorically clear that “neither me nor Mai Fatty ever signed any agreement to deport Gambians from Europe” and expressed natural curiosity over the source of these unfounded allegations. This matter was corroborated by the German envoy that his government never signed any such deal or agreement with any Gambia government officials and that he was in fact, willing to face the media on this unfounded story. Therefore, the Government of The Gambia wishes to make it categorically clear that it has never received money from any European country to facilitate the mass deportation of Gambians as is persistently alleged. These are mere allegations and our European partners can be contacted by journalists and all concerned citizens for further verification.

“In a related development, the Inspector General of Police, Mr. Mamour Jobe, and a cross-section of the Service Chiefs had a very successful meeting at his office with representatives of Concerned Youth Gambia (CYG) who passionately deliberated on the inhumane nature of deportations and the associated social stigma and indulged The Gambia government to immediately intervene. IGP Jobe thanked Messrs. Yerro Jallow, Muktarr Saho and Malang Camara of CYG for their legitimate concerns over the plight of our fellow citizens and informed them of both the Government and Police’s equal interest in the protection and security of all its citizens. IGP Jobe assured the CYG representatives that Government takes the plight of deportees very seriously as evident in the on-going discussions at home and diplomatic negotiations with European partners.

“In the end, the police and CYG were able to reach an understanding, a permit was issued for their planned demonstration to highlight the plight of deportees which finally took place peacefully on Thursday at the West Field Youth Monument.”