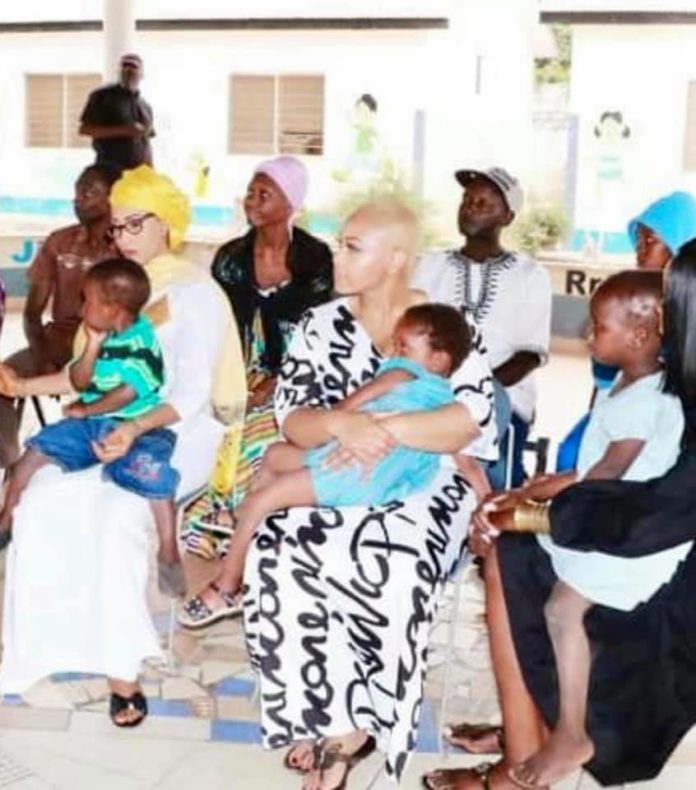 The day’s visit was an opportunity for Anita and the First Lady to be taken on a tour across the facility to know some of the challenges they are faced with and how they operate.

Omar Bajong, the Managing Director of Shelter for Children expressed delight and appreciation to the First Lady and Anita for their visit.

“We are very grateful for having time to visit us, on behalf of my team and my staff, you can see the joy and smile on the kids seeing the first lady.”

Bojang highlighted on some of the challenges the facilty is faced with; “There are a lot of challenges, we are challenge in terms of resources, the shelter needs to be upgraded, we need a lot of support to be done in this facility, right now, our main challenge is the issue of food and water supply.”

He added;” This shelter needs a lot of support, I have been working in this institution for the past 15years now and we are challenge because this is the only government center that takes in victims of gender based violence and abuses.”

The Managing director called on donors to aid in the sustainability of water supply to the facility.

“I am advocating for any assistance or donor to help at least have a borehole in the facility, so that it can easy the water supply.”

Anita says; “I feel like the women and these teen moms that have been abused and victimized, I think they need an opportunity to know that they are force to be reckon with.

She added; “As the world changes, their lives needs to change, change is inevitable and if we don’t change, they don’t have the ability to see change, if I didn’t change, I won’t be able to be here to share my story.”

“We need to makesure that we are in it, I know that this country as been through a lot for the past 22years, now that you have a new government, there has to be change, there was 22years of depression, 22years of people feel they totally been defeated, not been able to have a voice.”

She further said; “Now that you have a voice, now that there is awareness, now that you can talk about how you feel, things that you gone through, we need to bring things like this to the forefront, this is a time to change and these women and the elderly especially these babies that have been traffic.”

She added; “When somebody takes something from you, that’s taking your power, they feel powerless and we condemn ourselves and we walk in shame of something that somebody else in post upon us and this is not fair but at the same time, I know that they can change, I know that there is light at the end of the tunnel but there needs somebody here to look into their faces and reinforce those things.”

Aji Isatou Saho,  Programme Office for Think Young Women, says that the motive of the organization is to bridge the gender gap between men and women, inspire women to take up leadership positions in the country..

She went on to say; “If women don’t think out of the box, they will never be what they want to be, they need to think that women can do what men can do as long as you are motivated to do so, that’s how the name come about.”

According to her, she said that they training young women on leadership skills, what they do is mentor young women and girls from the age of 13-19.

“We take them on a three months mentorship program, where we talk about life skills, because these are skills that when you have you will be assertive enough to make proper decisions to be empowered to break gender gaps. We have organized forums were young men and women to come together to understand their role in development,” she said.

Ms Saho added, Gambia Is a patriotic  society were women are subjected to listen to men.

“We are not allow to be free, we are not allow to be independent, we encourage to be dependent on men. This is what we want to change, the notion and concept of people and empower women to take up decisions on their own and feel they can break any kind of gender gap when they want to.”

The Programme Officer highlighted on one of the achievements of organization in 2014; “We organized the first national conference on FGMC, were young people talk about FGMC and how they felt about it,” she said.

She advocates for change against gender based violence in The Gambia; “We can only end FGMC in a generation, coz we feel if each of us is empowered enough to take a decision and say I won’t mutilate my child, if we do that as young people in our generation, when it comes to 2050 we will live a society of zero tolerance to FGMC,” she says.

Isatou Jallow, Communication Officer Think Young Women pointed out on a  challenge that  the organization is faced with.

“Looking at the mentorship program at Think Young Women, we have people that come in and work as volunteers, apart from that there is no other comfort environment talk about issues affecting girls, we have the radio programs were we mostly talk about issues  of girls, you go to the communities to talk about these things, people don’t even want to hear what you have to say,” she said..

Anita says, change is made with progress; “I have totally inspired with these young women, they are so inspiring.”

She added, it’s good to see young women making it happen without the necessary funds.

The top US model says; “I had such a great time, this was amazing, am so glad that I was able to make it,  to come here and see what these young girls are doing.”

Mrs Hawkins added; “Me coming here was just wanting to see what this country is all about, what they are lacking, how can I help implement a change, what can I do, so am thankful being able to afford to come here and see what The Gambia has to offer.”

“Am thankful to God for all he has blessed me to do, and all the things we do as women, it’s all about empowering,” said Anita.

She added; “When I say power, empower, progress, inspiration, aspiration, we lept up each other and I thank you Gambia for having me (sic).”