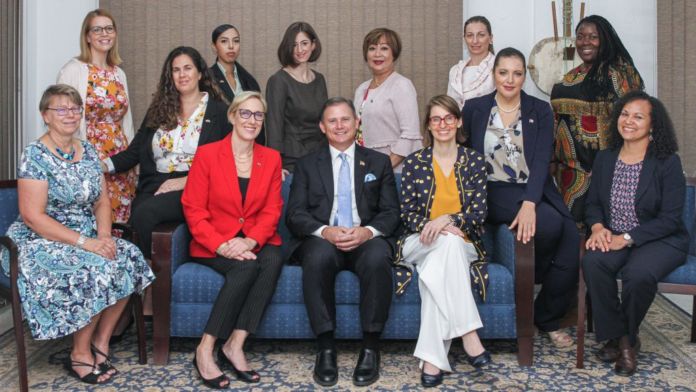 On any given Tuesday, in the small West African nation of The Gambia, something unusual in the history of U.S. diplomacy happens; when the U.S. ambassador enters the conference room for the weekly country team meeting, he is greeted by a dedicated team who represent the living, breathing embodiment of progress in breaking down gender barriers.

Around the table, the deputy chief of mission, the management officer, and leaders of the political and economic section, public affairs section, regional security office, and consular section—all one-officer sections, as well as the U.S. Marine detachment commander and executive office management specialist, are all women. They are also joined by the powerful female trio of leaders in the Peace Corps—the country director, director of programming and training, and director of management and operations. These women leaders make up a diverse team of professional diplomats promoting U.S. national security and contributing to the embassy’s integrated country strategy goals to support a successful transition to democracy for a country emerging from the shadow of despotism.

The American diplomatic corps have historically had a shortage of female leaders, due to numerous factors. For example, women serving at the Department of State before 1971 were forced to resign if they married. Many barriers and challenges to the advancement of females within the ranks were historically present, and the absence of female leadership negatively impacted American diplomacy—because of this, American interests suffered.
As time went on, many women and men recognized this problem. They fought for change in order to empower patriotic and gifted women and to ensure the Foreign Service could better reflect the nation that it serves. Today, in Banjul and missions across the globe, women serve without regulated caps on their achievements. Hopefully, the next generation will be able to continue to serve without cultural and gender normative limitations proudly.

This hard-fought achievement, with so many women currently holding leadership positions, is a testament to the fact that the struggle for inclusion, diversity, and fairness is worthwhile. While it may feel like the barriers holding back women, people of color, religious minorities, and other marginalized groups are too deeply entrenched to be moved, the country team in The Gambia proves that with dedication, passion, and vision, change can and does happen, even if progress is slow. This lesson is particularly important in The Gambia, where women are in a far earlier stage of their struggle for equality.

“For me, having gender equality at the top benefits everyone,” said Amie Ndow, Gambian host country national registered nurse and health unit coordinator. “Our key obstacle to women leadership is [a] mainly unconscious or implicit bias which can cloud judgment in ways people are not fully aware of. For the past decade there has been a significant improvement in women leadership in The Gambia, but the ratio is still not balanced at the top.”

In The Gambia, as in many countries, antiquated ideas about the roles of men and women in society are still strongly held. Gambian women are struggling to level the playing field, and they have a steep uphill climb ahead of them, even with traditional and religious beliefs stating that daughters do not inherit as much as sons. Women are and have been drastically underrepresented in the Gambian legislature. Since 1965, only 22 women have joined the ranks of the National Assembly, and only 11 of these women were elected by their constituencies—the rest were appointed by the president. Currently, only five out of the 55 legislators are women, and three of those were appointed.

According to UNICEF, more than half of girls in The Gambia are subjected to female genital mutilation before age 5, and more than 70 percent of Gambian women have faced this dangerous ritual in their lifetime. Domestic abuse routinely goes unreported; gender-based violence is rarely victim-centric, or victim supportive, and is also seldom prosecuted. Gender parity in grade school is roughly equal but drops significantly at the high school and university levels, in many cases due to early marriage and the expectation that young women must be responsible for most grueling domestic tasks. Gambian women face unbelievable hurdles on the quest for full participation in their society.

Local staff at Embassy Banjul recognize the value of removing barriers to women’s participation in diplomacy. The example demonstrated by the changing demographics in the Foreign Service tells a positive story, one that the embassy is proud to share.

“Our demographics, by themselves, reinforce our support for women’s rights, women’s equal opportunity, women’s equal treatment, and changing cultural norms that we, in the states, struggled with and continue to struggle with despite all of the progress made,” said U.S. Ambassador to The Gambia Richard “Carl” Paschall III.

Women in leadership positions bring an important perspective to policy, professional activities, and work-life balance. Shelly Seaver, deputy chief of mission, feels that promoting women’s rights and ensuring a balanced perspective is inherent in all of the work of Embassy Banjul.

“The commitment to well-rounded professionalism—a team environment, a focus on balance and perspective, as well as the promotion of personal and professional development—are all important characteristics that our outstanding country team members bring to the table every day,” said Seaver.

As U.S. embassies around the world celebrate International Women’s Day, March 8, it is important to remember that the Foreign Service is a leader in championing equality. The entire Department promotes equality every single day, not just through programs and engagements, but through demonstrating the tangible value of diversity. The composition of the U.S. diplomatic corps in The Gambia and at missions throughout the world demonstrates what can happen when a nation decides to chart a better course for its sons and daughters. Embassy Banjul is leading by example, showing the power of a functioning, diverse democracy that allows all of its citizens the ability to contribute. The American women at the Mission show this not just by being female leaders, but by excelling at their job of advancing American interests while representing the American people, day in and day out.

Editor’s note: The writer, Kathryn Edwards, is the public affairs officer at US Embassy Banjul. This feature article was culled from State Magazine, a monthly publication by the US State Department.