In the next few hours, Gambians and indeed the world at large would know the fate of the great leader of our party Lawyer Ousainou Darboe now popularly dubbed Gambia’s Nelson Mandala and his senior executive after having gone through a sham legal process in the name of a trial designed to definitively jail them.

Lawyer Darboe and his group of patriots came out in the streets on 16th Aprils 2016 to peacefully demand answers from the authorities about the death in custody of UDP youth leader Solo Sandeng who together with a group of young people were arrested 14th April after they displayed banners demanding electoral reforms.

From the highhanded manner in which state security personnel handled Mr Darboe’s peaceful protest to the way the trial was being conducted all pointed to a deliberate tactic of vengeful ploy to not only put the UDP officials behind bars but to definitively cripple the party.

We are urging all party militants to expect the worst from a judge who from the very start of this political persecution in the court has shown an unmistakable bais by ignoring the fundamental standards characteristic of a free and fair trial. The persecuted UDP officials had taken the ultimate decision when their lawyers withdrew from the case to refuse taking part in the trial process in order not to legitimise an already skewed case.

The international community is hereby informed of yet another ample evidence of arrogant belligerence by the Gambia government to refuse to abide by acceptable standards pinned on rule of law and respect for fundamental human rights.

The Gambia continues to regress into the unstoppable slide of chaos designed chiefly by a dictatorship bent on pursuing its agenda of autocratic rule. The courts which were the last beacon of hope for the ordinary people have now been morphed into this wider pervasive infrastructure of misrule where political cases are decided not in the courts but at the Office of the President.

But this is not by coincidence. Rather it is part of the wider strategies by the government to continue to deny Gambians their inalienable rights.

Whatever the outcome of the case, the UDP is determined as ever before to continue the cause for democratic change in the Gambia.

This is time for us to show that Gambia and the plight of Gambians matters to us. We should redouble our efforts in freeing this once peaceful, beautiful country called the Gambia from the clutches of a merciless tyranny. 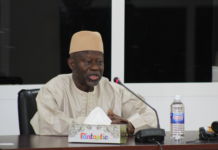