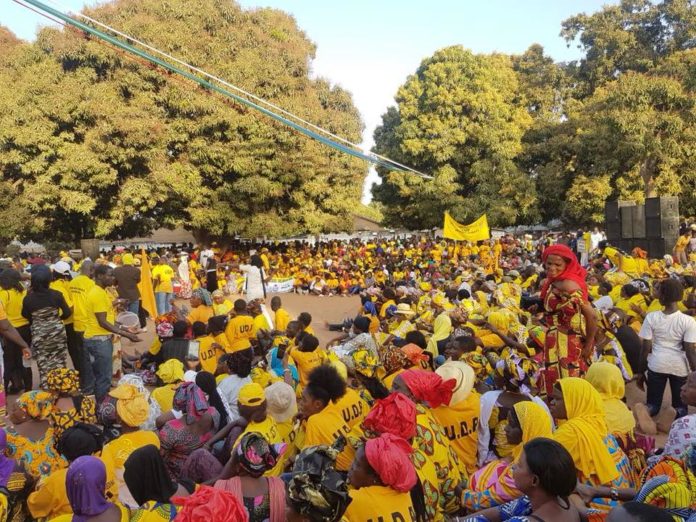 The United Democratic Party UDP holds its first political rally at Brikama after the ban on political rallies was lifted by the Inspector General of Police.

The ban was imposed by the IGP shortly after the political clashes between APRC supporters and villagers of Busumbala.

Speaking at the mass rally at Brikama, Lawyer Ousainou Darboe, Secretary General of UDP commended his party members for coming out in doves to attend the rally.

Darboe who is the current Minister of Foreign Affairs told supporters that the party is ever united since inception from 1996 to date.

“This is the time for us to unite because the president is relying on you” Ousainou Darboe told supporters.

“You’re the ones who gave him 31 Parliamentarians in the National Assembly after you made him win against 3 contestants at the convention to lead the Coalition 2016” he added.

The UDP Secretary General said President Barrow cannot be comfortable on the seat of the presidency unless the UDP wins the upcoming local government elections massively. He spoke about the sacrifices made by the late Shyngle Nyassi, Sarjo Kunjang Sanneh and Colonel Sam Sillah among others.

“Be careful of tarnishing the images of good people especially Amadou Sanneh (Minister of Finance) who was the National Treasurer of UDP and was locked in prisons by the former regime,” he said.

Darboe refuted allegations that they are amassing wealth for themselves, saying they are helping President Barrow in his development goals.

“The people who are close to President Barrow should be careful because he has trust in them, but if they betray the trust bestowed on them, they could face the commission of inquiry in the next government,” he asserted.

He urged party supporters to be law abiding particularly National Assembly Members who he said are not following their heart desires but serving the national interest. Darboe said his party will not join any party in the next presidential election but will contest on their own.

“We should come together as UDP supporters to support our own candidates,” Aji Yam Seck said.

“President Barrow has always attest to the fact that Ousainou Darboe is his father in politics,” she asserted.

“UDP is one party,” she added. She urged the people to select the best candidates for mayoral and chairmanship positions for the upcoming local government elections.

Meanwhile, Honourable Alhagie S Darboe announced that the primaries for the selection of mayoral and chairmanship candidates is moved to next Saturday.

“IEC Lacks the Capacity and Competence to Conduct the 4th December...

A Week to Election: Gambia Interfaith Bodies Call for Peace

‘I had to come back to Banjul’: Darboe explains that he...