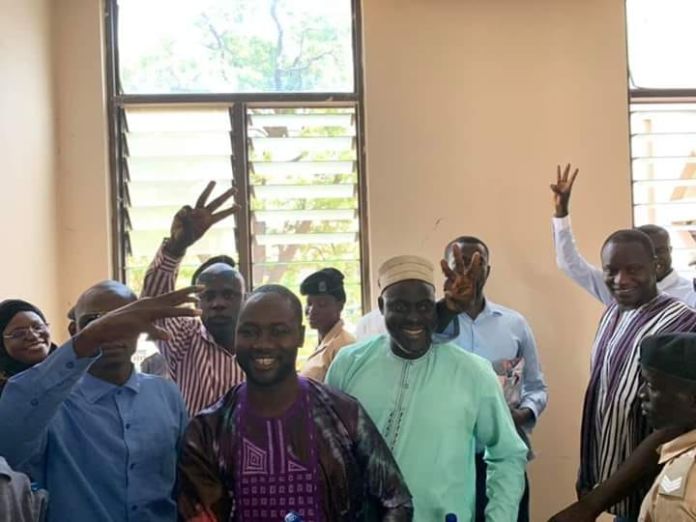 Presiding judge Amina Saho Ceesay on Tuesday adjourned the bail application hearing of nine leaders of Three Years Jotna to Friday after lawyers on both sides sparred over bail. The number rose to nine after Bakary Camara alias Camaraba joined the seven men and one woman.

And when the case was called, lead counsel for three years leaders, Rachael Y Mendy informed the court they have filed a 26- paragraphed affidavit in support of their bail application, adding the four-paragraph affidavit in opposition by the prosecution is defective because it contravenes Schedule One of the Evidence Act which according to her is a mandatory provision.

In a counter argument, Lawyer Patrick Gomez who leads the prosecution team for the State said it is their position that the affidavit that they have filed did not violate paragraph seven of the First Schedule of the Evidence Act 1994. He told the court that their affidavit was signed and sworn to by a commissioner of oaths. In countering Lawyer Mendy’s submission, Lawyer Gomez said there is no requirement in law that the signature of the Commissioner of Oaths to be on the left side of the paper.

He said the defence argument that their affidavit was defective was inaccurate adding that even if it is defective, the court can still allow it as he relied on sections 87 and 88 of the Evidence Act. He said there is no argument from the defence that the affidavit was sworn to before a person duly authorised.

He said averment four of the affidavit in opposition is sufficient to tell that they are opposing the bail application.

However, in defense argument second lead counsel Lawyer Lamin S. Camara said the application for bail was premised on sections 19 (5) and 24 of the Constitution as well as section 99 (1) of the Criminal Procedure Code. He said the 1997 Constitution provides for the protection of liberty and dignity of people.