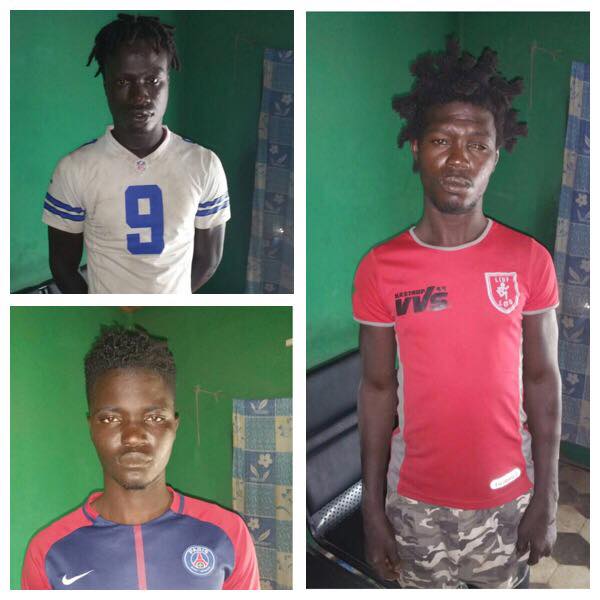 Three Senegalese nationals are in police custody for robbery with violence. Abdoulie Saine aged 25, Modou Faye 27, and Ousman Sarr 27 were arrested after they robbed a police officer at the SerreKunda market during the hours of 01:30 to 02:00 AM.

According to the victim, Corporal Lamin Darboe a traffic officer attached at the SerreKunda Traffic Annex, he was on night duty and his brother come to pay him a visit at the station where they chatted until around 01:15AM when his brother wanted to go home. Cpl. Darboe saw him off to the car park where he boarded a taxi (town trip) to go home.

“I was walking back to the police station when after I passed the baobab tree near the Trust Bank building I noticed three men following closely behind me. One of them walked past me and I noted that he was holding a beer bottle which he broke and stood facing me, blocking my way. I asked him to allow me to go on but he refused and instead made to strike me with the broken bottle. I tried to seal off the blow with my left arm and sustained a cut on the thumb, while I struck him in the face with my right hand. Then another held me around the neck from behind and the third one joined in and they wrestled me to the ground. Knowing that I was overpowered, I stopped struggling and let them rob me of D1750, 00 and a simple TECNO mobile phone. They then kicked me several times before they leave”, Cpl Darboe narrated.

He furthered added that after they left him helpless, he got up and rushed to the PIU officers on night patrol duty around the Serrekunda black market where he reported his ordeal.

He was assigned a personnel and they hired a taxi and pursued the assailants and arrested two of them somewhere around Dippa Kunda.

The task force was dispatched in search of the third suspect who was subsequently arrested around Jaiteh Kunda Street. His mobile phone and D650,00 were recovered from them.