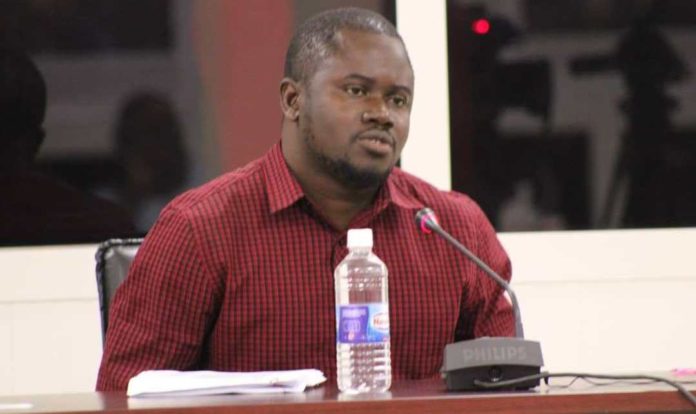 There are no favours.

And boy, Baa Tambadou isn’t perfect. He’s a sinner that refuses to repent for his sins against divine right of freedom of expression. He has defended false news in court and reminded us some few months afterwards that the law is still here, alive and threatening.
False news flies in the teeth of the sacred human rights principle of equality before the law.

Lemme explain in simpler terms! When a government lies with the purposeful ruthlessness and alarming frequency that it does, that’s called protection of national security, public health and decency. When a journalist or politician or activist lies against the government, that’s called conduct conducive to breach of peace.

Now, my friend, even in a banana democracy, whose lies should be protected? The one paid by taxpayers to tell nothing but the truth or the one paying taxes so he could have the ‘liberty to know, utter and argue freely according to [his] conscience [not according to what is true] above all other liberties’.

False news is unjust. No justice minister should defend it. The government – any government – lies and he that lies cannot be the police of truth.

So boy, Baa is a damn sinner! But oh boy, wasn’t Mandela a saint who sinned against women, farmers et cetera! Yet, on the day of judgement, on earth for his peace prize and in heavens for his worldly deeds, the merchants of justice adjudged him on the basis that his bad and good deeds were put on a pendulum and it swung in favour of the latter. Apply similar rules in the context of press freedom champion award and Baa will pass with flying colours. He might have a firm stance that false news is ‘necessary in our democracy’, but he conceded on the unconstitutionality of sedition, criminal defamation and false publication on the internet.

Above and over any other consideration, through Baa’s office, the government has commenced implementation of Ecowas Court decisions on crimes committed against various journalists by paying up an estimated US$250,000 of compensation.

Notwithstanding this being a burden inherited from the misrule of the former government, Attorney General Tambadou, with due prominence and sheer commitment, carried that heavy cross onto his government’s financially leaned shoulders. The implementation of the ruling of the Ecowas court means so much to the GPU and anyone who cares about freedom of press and safety of journalists. By paying up, the Gambia is now a leader among its peers on the sub-regional stage. The last time I checked, there were more than THIRTY decisions of the Ecowas court that have not been complied with by Ecowas members, including well-established, well-nurtured democracies.

Granted, there has not been any government-initiated reform of any piece of anti-speech legislation, but at least criminal defamation, false publication on the internet and part of sedition is no longer enforceable against journalists and citizens. Contrary to what was written by some veteran elsewhere, there was no Freedom of Information Bill on the Justice Minister’s desk until two weeks ago when we drafted and submitted it for his ministry’s consideration. He received us warmly, promised to work with us towards the enactment of the law and even contracted the proposed timeline. On this subject and on the broader issues of media and freedom of expression law reforms, the line of dialogue remains open.

Lest we forget that the setting up of the TR et cetera Commission was in no small measure influenced by the need to seek justice for the murder of Deyda Hydara, the disappearance of Chief Ebrima Manneh and the torture and brutalisation of many other media professionals.

Lest we also forget that the constitutional building process was in no small measure influenced by the need to provide broad constitutional guarantees for fundamental human rights and freedoms. This therefore provides an opportunity to ‘entrench the future’ we want for journalism through broad constitutional protection for issues of freedom of expression, freedom of the media and freedom of information. In all these, from public consultations and constituting the commissions, the media through the GPU was involved beyond by way of mere consultation. The GPU has been asked to nominate representatives who were endorsed. The GPU also took part in selecting members of the various commissions, including the National Human Rights Commission.

So boy, you see, Baa is a sinner who has done so much for press freedom. It is not only laws that matter. Life doesn’t stop or begin there. Impunity matters. Inclusion matters. Recognisation of the role and work of the press matters. There are good, hard-working people in government. They may not out-rightly concede on our every demand. But we can reward and recognise exceptional efforts even as we jaw-jaw. We know how much it cost to war-war. We’ve been there, bruised and battered, and only few people heard our cries. So, in case one missed it, in our rebranding efforts, the GPU is transitioning from a ‘resistance movement to a proactive organisation’ with appropriate programmes, policies and approaches to effectively engage with public policy and influence it in favour of press freedom. So guys, diplomacy is as much at work at the GPU as KMC is at work in Kanifing Municipality.

And don’t get it twisted. The 2019 journalism awards wasn’t about Baa Tambadou. It wasn’t about the Fatous from Mars either. If you’d forgotten – or you were not around, it all began with a humble start, some four rains ago. Appai and his many Alagie Martins were around. All we wanted to do was to quietly promote journalism in a country where the role and work of the press was policitised, misrepresented and underplayed. There were not many friends then. There were few Facebook comments and shares and even fewer tweets and retweets. Welcome to New Gambia! To all friends of the media, new and old, defend press freedom and support journalism for the good of our country. A humble plea, though, I hope won’t hurt: don’t bring your partisan politics here. Unity was what saw us through those difficult waters. So, bring your needles that would tie us stronger, against looming storms, not your razors that would tear us apart and weaken us.

For the benefit of those who didn’t care to read the many dispatches on the award, and are speaking from Venus, here’s how the journalism awards works. The competition, which has been a flagship event of World Press Freedom Day commemorations is prided as the highest and most prestigious journalism award in the country. It is open to all Gambian journalists working in print, radio, television and online. If you trust your journalism, you shouldn’t be afraid to compete. There are more than 20 awards up for grabs, covering wide range of fields of reporting – politics, sports, business, health, environment, investigative, human rights, tourism, agriculture, courts, women and children. Individual journalists, not media organisations, submit stories they believe can win them awards.

For purposes coordination, the awards events are organised by an adhoc committee that operates independent of the GPU Executive. The mandate of this committee is to fundraise and coordinate the organisation of the award events. It comprises media professionals from different media outlets. The committee works closely with the secretariat and that’s headed by me. I am represented by a GPU programme officer in Haddija Jawara.

Then, the judges! We have such a nice thing called Journalism Award Jury. This comprises eminent media professionals with no loyalty or allegiance to any journalists or media house. The chairperson of the jury is Agnes Thomasi, who heads the Dakar-based West Africa Democracy Radio. That lady – if you could even imagine that she would show favour or affection in this work, then you do not know her. And if you do not know her, well, that’s your problem. You’re supposed to know before you comment on her work, no? And, on the panel, there are many such others with enviable track record of professionalism, including Gambia’s own Esau Williams of the BBC; Aisha Dabo, a highly qualified media and communication professional based in Dakar; and Hasoum Ceesay, a former editor now director of National Council for Arts and Culture. To promote a bit of diversity, we brought in a non-media personnel, Abdoulie Kurang, a young but exposed and experienced lecturer at the University of The Gambia. These are the professionals who, without any fear or favour, affection or ill-will, determined who gets an award.

The competition has an Honorary Award component. Previously called GPU President’s Award, the Press Freedom Champion awards goes to individuals and institutions who have contributed significantly to the freedom and development of the media industry. Here, the president and his executive members have the discretion to determine who gets awarded.
Mustapha K. Darboe? Well, if you know the media landscape well, you’d know that whether he’s working for Kerr Fatou or Kerr Waaru, he’d put up a strong challenge. He had dominated the awards before he became GPU vice president and when he was at The Standard Newspaper. His hunger is so far unmatched! I am more concerned about the fact that only four women got shortlisted and only one got awarded. I hope Mustapha were a woman – perhaps it’ll do everyone good if he changed his gender as he’s of no use to menfolk.

The little birds in yellow? Oh My Word, I was equally shocked when I saw it while entering the hall. But so was Sheriff Bojang Jr. Not that it was wrong but it is quite ridiculous how Gambians see colours through the narrow prism of partisan politics, rather than fashion. The ushers operate under the award committee. The choice of colour of the dress was and has always been that of the ushers who might not be as sensible to the sensibilities of the political environment as I am. These are young women with no political allegiance. All they wanted was to look good in a colour of their choice. They were in yellow and that makes the GPU a UDP group. But the coordinator of the award who organised the ushers was in green but that doesn’t make the GPU an APRC group. You see, boy, don’t bring your partisan politics here.

Now, it is already midnight in Brikama and Niumi and in the words of the storytellers of yore, ntaling konkorondangkos.

The writer, Saikou Jammeh, is Secretary General of the Gambia Press Union