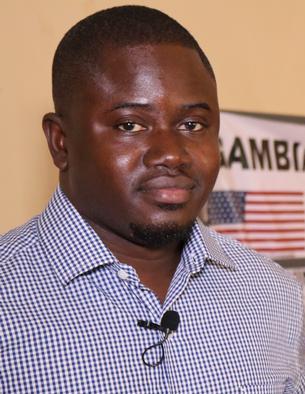 The Point was not on point. Two girls, raped and sexually molested, were in the pages of the newspaper. This breach was gross – ethically and legally. The country was shocked. The doubting Thomases of the new-found press freedom shout from mountain tops: untrained and uneducatedbunch they are butka journaliso butongo lo. Those sitting on the fence have jumped on their side. Supporters of the press are reconsidering their position: well, I’m a believer of press freedom but how could they do that. Oh, no.

A born again: welcome to Africa’s newest democracy. Here, to err wasn’t journalism. Now it is. This time, the culprit is an unlikely villain.Dawda Faye, the file man. Seasoned.A specialist. Get to know him better than that: he carries more than two decades of experience in reporting courts in the file he carries. Enviably professional, he arrives at the court before the cleaners. His reporting style is simple and matter-of-factly: just write as the court says or does. No colouring, just a bit of sand-papering.  He has authored two books being used in schools, including University of The Gambia. He has mentored the country’s finest journalists. The editor, Bekai Njie, belongs to a prestigious club of few journalists with a degree in the practice. The newspaper, The Point, is the country’s first of its kind and continues to lead.

When bad story comes from good journalists, what do you call that?

Is it a honeymoon or a democratic culture?

In spite of their professional pedigree, The Point and Dawda are not innocent. When you publish errors like this: ‘…car raising’, instead of ‘car racing’ in screaming headlines, that’s horrible. When you write a headline ‘Nigerian rapes…’, instead of a ‘man rapes’, that’s called sensational journalism. When you publish the names of underage sex abuse victims and describe the graphic nature of it, that’s reckless.

The Point is not alone. The Voice often makes mistakes, of grammar and facts. The Daily News and Foroyaa could do way better than they’re currently doing in cleaning up the copy. The Standard run corrections more times than acceptable from that paper. Sarjo Barrow and Pa Ndery Touray of Star FM are pushing the boundaries of objectivity in journalism.

No dispute here. There’s freedom and boom in the media after the dictatorship. Where there was only one television outlet, now there are several. Where online media used to operate from abroad, now greater number of them are on the ground and produce more verifiable editorial content. Where music used to dominate the air, now there’s information overload in radio broadcasts. Where laws dangle over heads, now they are asleep. Where mistakes are few and costly, now there are many and excusable.

Fortunately, the honeymoon may not be over, after all. Or, is it really a honeymoon or a genuine, lasting embrace of the values of press freedom? Time will tell. For now though, abominable mistakes are being accepted as part of the noise that comes with democracy.

Dawda and The Point could have been charged to court. If convicted, jail is likely. They haven’t and are unlikely to face criminal indictment. Instead, on social media and through official requests, the GPU has been called upon to act; and whip The Point on the Front Page. Press freedom cannot be any better when people recognise and appreciate the democratic norm that the press should regulate the press through moral sanctions. The government should stay far off.

The struggle against government regulation

The Gambia media had stood against repeated attempts by previous governments to regulate the media.The price paid was expensive. The question has never been whether the press should be regulated.Rather, it has been how the press should or ought to be regulated. There were deep divisions. There still are those divisions, although smaller. It is not only a matter of media vs government. It is also about conflicting views within media and within government.

In 2016, the GPU made an important first step towards establishing ethical standards by launching an industry-wide code of conduct. The code provides guidelines and ethical standards for all categories of news media journalists – print, radio, television and online. In 2017, the Union embarked on a nation-wide campaign – each media practitioner a copy – to popularise the code.

What has been missing is a body that will monitor compliance and enforcement of the code. A best practice visit in Ghana followed. A good amount of literature has been reviewed and more than ten experts consulted, from Norway to South Africa, from Ghana to Kenya, from Denmark to Zimbabwe, from UK to Australia. Consultations continue. From last week when the media reforms committee – a technical group co-chaired by GPU and Ministry of Information – scrutinised the founding documents, to this week when journalists, media owners and the members of the public will debate the issues, the Gambian model being developed will take into account international standards and Gambian characteristics.

Media Council of The Gambia

Few things are becoming clearer about what is proposed to be called Media Council of The Gambia. The Council, with a guaranteed independence, would be a non-statutory body, but it would be recognised by the state and will have legal underpinnings. Besides having a multi-stakeholder representation,it would regulate content across all media platforms – print, online, radio and television, and also state and private.

The fears about this model of media self-regulation are a matter of genuine concern. Would the Media Council have a tooth to bite without a legal framework and without a court-like order? What happens if an offending journalist refuses to comply with either the decision or the process?

Self-regulation works. It is the most prominent and common media regulation system in the world.The system is fair, fast and free. But one thing is clear: it is up to the media to make it work. The how of it is obvious: total submission to upholding the standards the media set for itself.

Journalists are no gods

Until few weeks ago, the power of moral sanctions has not been properly tested.Then, The Point newspaper published the names of sex abuse victims. Such media conduct is not only immoral, it is also seems to have violated a number of laws, including the Children’s Act, the Women’s Act and Sexual Offences Act.

However, The Pointhas refused calls to correct the story or apologise in an appropriate manner. It has also refused legitimate calls to pull down the story from its website. The Union’s press release, condemning the conduct, was trashed in the trash bin by most major media outlets.Some journalists even went further to call out the Union for publishing the condemnation. To them, the right thing to do was for the Union to visit the offices of The Point, and plead with them to put up an apology.

Journalists are no gods.The media make mistakes. Accountability of the media is an important hallmark of responsible journalism. The ethics of the profession require a journalist to swiftly correct a wrong-doing and apologise in an appropriate manner.

A Council in honour of Deyda Hydara

The Point’s refusal to appropriately apologise and swiftly pull down the story, and the refusal of some media outlets to publish the condemnation appear to send a clear message that the Gambia media has coalesced to show solidarity with an unethical conduct that is criminally indictable, rather than defend professional standards.

However, even as The Gambia media failed this first test, that doesn’t meanthat,there shouldn’t be a second chanceor a third chance or more chances. As we nurture our democracy, we are constantly reminded that we rather err on the side of democracy than err on the side of repression. But ultimately, the media cannot eat its cake and have it. The media have to make a choice: to embrace self-regulation or invite the state to come in with force.

In a democracy, where press freedom is valued, the choice is never mistaken. On December 23, therefore, in marking the 14thanniversary of the murder of Deyda Hydara, the GPU would launch the Media Council of The Gambia. There cannot be a more fitting way of honouring a former GPU president who paid the highest price in the defence of press freedom. Deyda stood strongly against the former government’s regulation of the media. Now he welcomes in his sleep the baby he anticipated. May His Soul Continue to Rest in Peace!

The author, Saikou Jammeh, is the Secretary General of The Gambia Press Union.