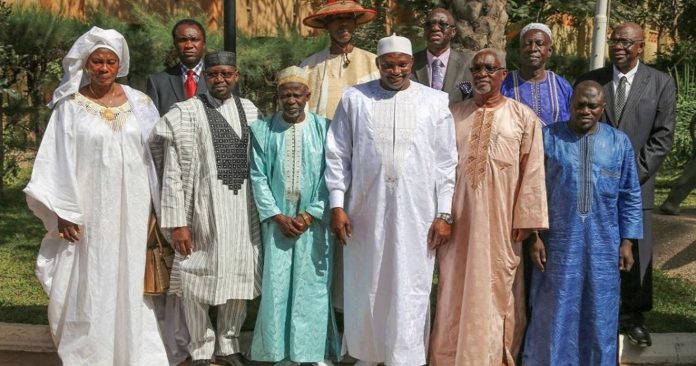 “Yesterday, everyone was scared, saying Jammeh had power.

Well, I wanna tell you that I have more today than Jammeh ever had.

People were scared of Jammeh because he had soldiers, police and SIS… but me, I have police, soldiers, SIS and ECOMIG… all at my disposal…”

The above remarks were recently made by new Gambian President, Adama Barrow. Barrow came in on a promise to lead the nation on a new path of progress, democracy and good governance. He was chosen in December, 2016, on a coalition ticket, to replace the notoriously repressive regime of Yaya Jammeh. So, for “Moses,” as he was named by his political godfather and now Vice President, Ousainou Darboe, who had come to save Gambians, to now compare himself to the dictator and brag that he has control of the country’s security forces, as a show of strength, is deeply disturbing. Gambians were quick to express their outrage at the President’s outrageous and irresponsible remarks. Barrow’s remarks are unacceptable and deserve condemnation from all quarters. With the overwhelming goodwill and show of support he came in on, to say that President Barrow has been a huge disappointment is an understatement. However, I would argue that there’s another group of people who are an even bigger disappointmentthanAdama Barrow – Ousainou, Halifa, OJ, Fatoumatta, Isatou, Hamat and Mai.

Prior to the December 2016 elections, I had never heard the name Adama Barrow.  Nobody knew him. We are told that he was a “nice and quiet” middle-aged errand boy for some Real Estate businessmen. He was an unknown, inconsequential assistant treasurer for the UDP party. When the coalition was formed, they needed a candidate at the top of the ticket. Because the dictator had jailed almost the entire leadership of the biggest political party, the UDP, eyes landed on the unassuming assistant treasurer, Barrow. The coalition held a convention and all the parties decided to throw their weight behind him. The rest of the nation invested labor and/or resources to elect him.

Why would Gambians elect an unknown man to lead nation? Well, for two reasons. First is that Gambians had had enough of the dictator and were only focused on getting rid of him. At that point, if the best way to get rid of Jammeh was to elect a monkey with lipstick, many Gambians, myself included, would have voted for the monkey. The second reason Gambians voted for Barrow is because of TRUST. No, we did not know Barrow to trust him, we knew the leaders who presented him to us and asked us to support him. Gambians knew Lawyer Ousainou Darboe, Halifa Sallah, OJ Jallow, Aja Fatoumatta Jallow-Tambajang, Dr. Isatou Touray, Hamat Bah and Mai Ahmad Fatty. Most were trusted political leaders who had spent years making a difference, in their own way, and had earned some level of respect in Gambian society. Therefore, even those of us who had questions about Barrow, cast aside our doubts with the belief that these trusted leaders would guide Barrow through the transition period if he was elected as they had asked us to do. We believed that if Barrow dared veer off course, they would be on hand to hold him accountable, just like they tried to do with the brutal dictator. Surely, these “patriots,” who had spent years telling us they would do anything to make sure Gambia enjoys good governance, would never allow their own candidate to stray, we thought. And this is what makes these leaders a much bigger disappointment than Barrow. Because we did not know Barrow, we had very little expectations. To these leaders, the fate of an entire nation was placed. It has been both disappointing, and sad, to see how quickly and how easily they were emasculated by their own chosen “man-cub.”

I hope these “leaders” are reminded that it was them that Gambians entrusted with the huge responsibility of leading the nation through the transition. So far, they are failing us and history will judge them for it. Everything that was wrong under Jammeh is still wrong today, and as the people who brought us Barrow, they have a duty to try and put a stop to it, or at least speak out against it. Those still in government need to do more within the administration. Those outside of it should not be deterred by their egos, personal material interest, or their fear of being labeled haters. They need to speak up against Barrow’s wrongdoings just like they did against Jammeh. So far, all the heavy lifting has been left to GDC, PDOIS and other activists, while the leaders who brought us Barrow turn a blind eye. Following are some of the many other issues Gambians wish these leaders would weigh in on.

To Ousainou Darboe, Halifa Sallah, OJ Jallow, Dr. Isatou Touray, Aja Fatoumatta Jallow-Tambajang, Mai Ahmad Fatty and Hamat Bah, Gambians braved the odds, risked everything and elected the candidate you presented to us. We did not know Barrow, it was you we trusted. We are counting on you to hold this president and this government accountable, and guide it towards fulfilling the promises you made to us back in 2016.