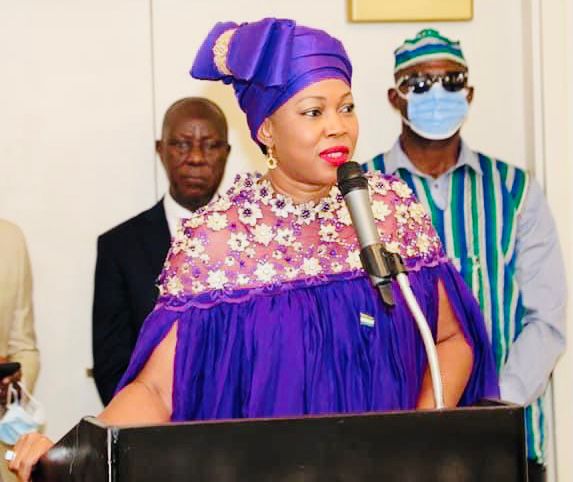 The First Lady of Sierra Leone, Madam Fatima Bio, on the 25th September 2021, presented to Sierra Leoneans in the USA the “Hands Off Our Girls” as the People’s Campaign where she praised her husband, President Dr Julius Maada Bio, for successfully securing an agenda item at the 76th United Nations General Assembly.

Madam Bio said this during a fundraising event organized by “Friends of the Hands Off Our Girls Campaign.”

The First Lady said that the programme is a continuation of the campaign which started in Sierra Leone and now on a global stage at the United Nations.

She thanked friends of the campaign and various stakeholders, including Legal Access through Women Yearning for Equality Rights (LAWYERS), Rainbow Initiative, a national non-governmental organization that is passionate about ending sexual gender-based violence in Sierra Leone, the Judiciary and the Sierra Leone Police for supporting the “Hands Off Our Girls Campaign” over the years.

First Lady, Madam Fatima Bio, also highlighted the ongoing 34 Military Project, which is being undertaken with funds raised by the campaign and praised her husband for providing her with the platform to support his human capital development vision through the campaign.

“President Bio, my husband, is the only African leader who has given so much voice to justice for victims of sexual violence and rape,” the First Lady said.

In a short statement, President Bio said that if they were to demonstrate seriousness about developing the country, they should carry women with them, adding that his Government would need a bigger coalition to protect women against sexual violence and rape.

The President stated that it was no longer the First Lady’s campaign but rather it is now Sierra Leone’s campaign and called on every woman to support the campaign.

“When we are changing Sierra Leone, it should be inclusiveness and women and girls should be part of it,” he concluded.

During the fundraising event, the “Friends of Hands Off Our Girls Campaign” raised US $110,000 dollars, a little over Le1.1 billion.

The “Hands Off Our Girls” campaign was initiated by the First Lady and launched few months after her husband assumed office in April 2018. The campaign is said to have greatly raised and increased awareness on sexual penetration and gender based violence in Sierra Leone as girls and women are becoming bolder to speak out and report cases of sexual penetration and rape than before.

Sierra Leone’s judiciary now has a special court on sexual offences and punishments for such offences have been made tougher, ranging from years imprisonmen to life imprisonment.