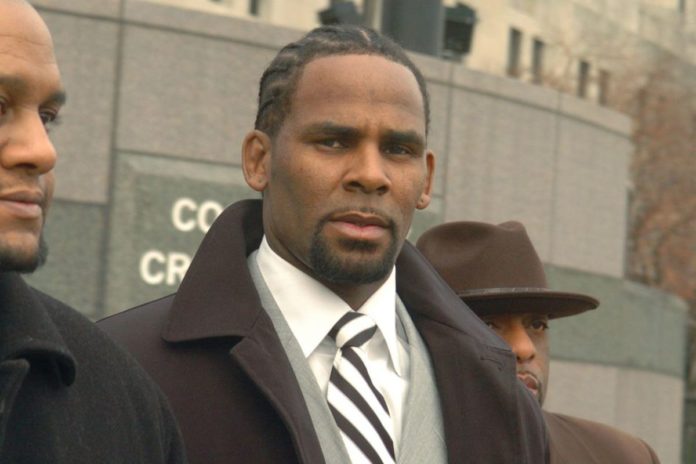 R Kelly will not be released from prison ahead of his federal court trials a judge ruled on Tuesday.

This comes after federal prosecutors revealed that they are in possession of three tapes which show the singer raping a girl, 14, and then subjecting her to ‘sadomasochistic abuse.’

Assistant U.S. Attorney Angel Krull then made a point of stating: ‘There is no question that it is the defendant on these videos.’

Kelly is seen in close-up and two of the tapes were filmed in rooms that are distinctly similar to ones in the singer’s former home.

Prosecutors also said that the victim’s age is said fifteen times on one of the rape tapes.

The singer’s lawyer Steve Greenberg responded by presenting his client as a broke family man with an aversion to flying, and even confirmed that the singer is in fact ‘illiterate’ in his failed bid to convince the court that Kelly was not a flight risk.

‘Unlike his most famous song – I Believe I Can Fly – Mr. Kelly doesn’t like to fly,’ declared Greenberg at one point in the proceedings,

That dated, and arguably false, statement failed to convince Judge Leinenweber however, who denied the singer’s request for bond and then arraigned him on the indictment filed in Illinois last week.

Kelly entered a plea of not guilty. He faces 195 years in prison if convicted on the Illinois charges.

Things got off to a difficult start for Kelly on Tuesday, as prosecutors from the Northern District of Illinois confirmed that the minor female who was believed to be on the rape tape that resulted in Kelly’s 2008 Cook County trial is now cooperating with authorities.

That young woman has now gone on the record prosecutors said on Tuesday, and there are five witnesses to corroborate her story.

The tape from that trial is not one of the three that prosecutors have in their possession.

A lawyer for that victim did not respond to a request for comment.

‘He is an extreme danger to the community, especially to minor girls,’ argued Krull on Tuesday.

She was also prepared with an argument against an electronic monitor as well, stating that this would not restrict the singer from continuing to commit the crimes he stands accused of in that state.

‘The defendant can entice girls to his own doorstep,’ Krull told the judge.

‘He doesn’t have to leave his home to do that.’

Greenberg dismissed this later, stating: ‘There’s no evidence that he’s a risk to minors at all at this point.’