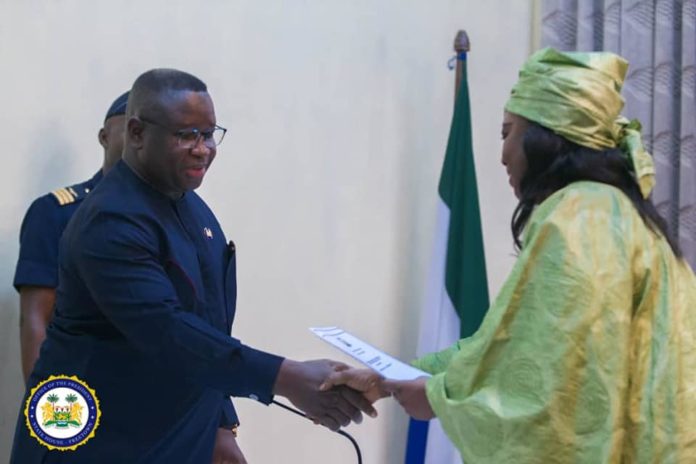 His Excellency President Julius Maada Bio has signed Performance Contract Undertakings with Cabinet Ministers that will be facilitated by the Office of the Chief Minister, during a brief ceremony held at State House.

In his opening statement Chief Minister, Professor David John Francis, said the event created a moment to hold ministers and their deputies accountable to the people of Sierra Leone and for the confidence reposed in them by the President by graciously appointing them to their respective roles.

He said the performance management would ensure and strengthen effective public service delivery that would positively impact the lives of the people, saying that as public leaders they had been entrusted with the responsibility to deliver services. He stated that signing the contract would build a culture of delivery and service delivery responsiveness.

“This contract will improve Government’s effectiveness in service delivery, develop a culture of accountability and trust in the public sector, transform the negative image of public servants and political leaders through performance and delivery, create value for money and a clear understanding of incentives and sanctions for service delivery,” he said.

In his brief response, President Bio said the event was a milestone in the journey to make Sierra Leone a better place for everyone. He said during his campaign, he had pledged to effectively deliver services to the people of the country, which he was doing through his ministers.

He added: “I want us to deliver tangible results that will have impact on the lives of Sierra Leoneans. Most Sierra Leoneans had lost trust in government but as a new government we are changing that narrative now and I need you all to show leadership in your respective ministries. Together, we can deliver on our mandate to the people of this country.”