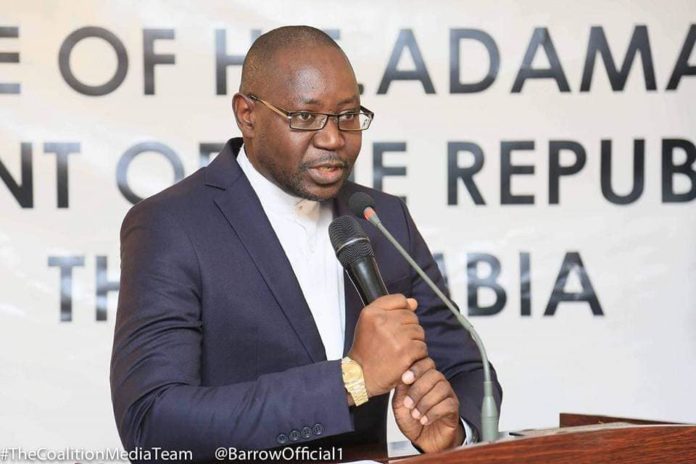 New Yundum Saturday voiced disappointment at remarks by President Adama Barrow’s special adviser Mai Ahmad Fatty that the behaviour of the people of the community was posing a threat to the environment.

Mr Fatty at an emergency press conference in the wake of last week’s airport plane mishap said people who live around the airport were engaged in indiscriminate dumping of waste.

New Yundum, one of the communities around the airport, issued a statement on Saturday describing Mr Fatty’s choice of words as unfortunate.

The statement reads in part: “First, during the Press Conference, Hon Mai Ahmed Fatty infers that New Yundum and other surrounding communities are responsible for attracting ‘’Birds’’ into the Airport premises  due to their  ‘’bad attitudes’’ in indiscriminately dumping refuse and that  consequently poised a serious danger to Flights safety at the Airport.

“It is utterly disappointing that such irresponsible and inconsiderate statement above could be directed to the people of our community and from a man of Hon Mai’s status and position in our governance structure as a country. This we as a community, took as a hard knocked and affront plain insults to our community and people. We will like to remind Hon Mai and the purportedly constituted task force, that he (Mai) may be obliged to speak for, that; the People of New Yundum are not a cause or a source of attraction of birds into the Airport and thus has never serve as a trouble for Flights safety in the country. The dump site in use by our people is an area consensually accepted for the dumping of refuse for the community. Therefore, we expected the blatant failure of the Brikama Area Council to be of highlights of the Press Conference of not executing their rightful duties in the collection of refuse from the community rather than an attack of such irresponsible statement against the unconsidered tax payers of our community. Beside, we would like the general public to understand that the closure of the Airport on this faithful day has nothing to do with Bird strikes instead a ‘’Technical Failure’’ and the incapacity of the authorities to sort out the fault rather than diverting the public attention on our communities.

“Moreover, Hon Mai confirmed that a ‘’ Task Force Committee’’ was set up by the President to look at all the parameters surrounding the Airport and that the conclusion was, the problem has to do with the attitude of ourselves. Then what is the use of the task force when the lead of the force has already confirmed the cause of the problem even without investigation.

“Furthermore, this is indeed a news to us and one would have expected  that a task force committee of such a nature and considering the location of the Airport and the people mostly affected will serve as a key stakeholder in the formulation down into the implementation of the laid down policies. But unfortunately, the total disregard of the importance of stakeholder management and involvement on any policy formulation, implementation or monitoring in this case is totally disregarded by the responsible authorities. This serve as an affront of total disrespect of our local authority structures!

“Thirdly, It is unfortunate that the tone and choice of words used by Hon Mai Fatty in conveying or asserting his message is too commanding and sends an authoritarian feature in him or the authority he is authorised to speak for of how he is perceiving this whole saga and in particular of forcefully demanding that our people including the Alkali, The VDC, The Imam and the Young people MUST come out in their numbers to clear the mess been done by themselves and their own people going by his exact words. We would be very happy to advise the Presidential Advisor to not deviate from his responsibility, which is to advise the presidency on issues relevant to the realisation of the country’s dream, but not to use the media space to speak vulgar and or, unfounded allegations against the innocent communities of New Yundum.

“To move on, we call on the Brikama area council to live up to their responsibilities by providing refuse bins for our people or have periodic collection of waste from our communities. This will help in the preservation of not only the surrounding of the Airport, but even the environment of New Yundum.

“Again, we will like to call on the GCAA to be fulfilling their corporate social responsibilities. For so long, our land, water and air have been over polluted by the authority, and we think it is about time that they consider doing what is expected of them.

“Finally, we unreservedly demand a public apology from the task force through their lead, Mai Ahmad Fatty, who has uttered such irresponsible, discourteous, and ungracious statement against the people of New Yundum Village.

“However, we reassure the general public of our utmost concern of the Safety of the Airport. The safety and security of the flights coming in and out of the Airport is equally the safety of our community. Remember, New Yundum has housed the Airport for centuries now.”