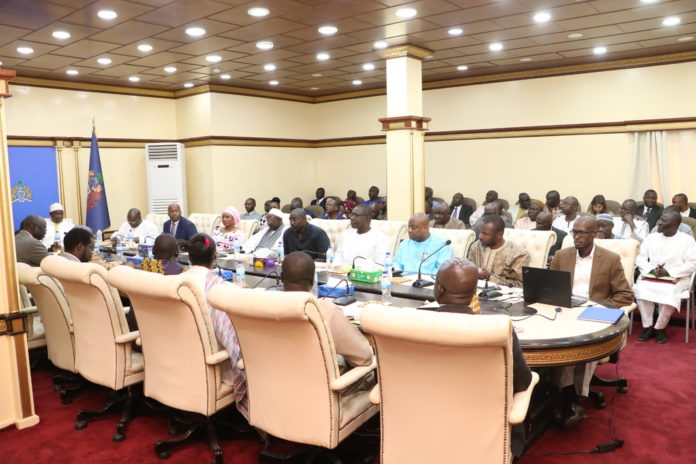 State House, Banjul, 4th  April 2018 – President Adama Barrow received the Ministries of Agriculture, Fisheries and the Environment as part of the first quarterly sectoral briefing on their engagements with the National Development Plan. 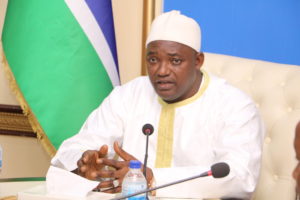 The President thanked the sectors for their briefings and reiterated the need to align their activities towards the realization of the national plan.  Commenting on the presentation, President Barrow cautioned that attention should be given to the impact of climate change on agriculture and food security.  He advised the ministries to look for alternative innovations and urged people to take advantage of the land and water resources.  The President emphasised that the country should also take advantage of its youthful population to partner with stakeholders for resource mobilisation and knowledge transfer. President Barrow called on Gambians to actively engage in the fishing industry whilst adding that he was impressed with the transparency the Fisheries Ministry demonstrated in eliminating the cash payment system and cited similar best practice in Rwanda.    The Gambian leader called on all to support and collaborate to succeed with the NDP.

In its briefing, the Ministry of Agriculture reported that it has completed the review of its ten year policy for the period 2017-2026, launched a national investment plan –GNAIP and the revitalization of its database.  For the period under review, Japan and China have support for the Agriculture sector.  The Ministry also reported on its tidal irrigation projects and the strategies to add value to local products.   It was also reported that negotiations are on for mechanization of agriculture as well as engaging the Gambian Diaspora to invest in commercial agriculture and empowering the youth through agriculture.  It was also reported that the ministry of Agriculture engaged stakeholders to improve on poultry farming and food hygiene as well as provided seeds to farmers.

The Ministry of Fisheries, Water Resources and National Assembly matters reported that its policies were revised, and has realized an increase in the fish resources.  Twenty-five communities have been provided with solar powered water systems, twenty youths trained on aquaculture and women were also trained on improved techniques in fish processes.  The ice plants in Gunjur and Tanje have been repaired and it has a refrigerated truck to reduce post-harvest lost in the fishing industry. Fisheries reported that between January and March this year it generated 50 million Dalasi paid to the Ministry of Finance.   It also supplies fish to prisons, hospitals and the Army. It also generated support from FAO, AfDB, World Bank, and Saudi.

The Ministry of Environment and Forestry reported that it has completed a strategic plan; the forestry Act 2018 has been enacted and in partnership with agriculture developed the Agriculture and Natural Resource Policy. It also reported on projects to develop community forest parks, biodiversity, and on environment threats in the coastline areas.  It has intercepted a container loaded with plastic bags to enforce the ban on plastic bags.  A strategy for biodiversity to encourage women into bio-entrepreneurship was also shared.  The Environment Ministry clarified that it is the municipalities that are responsible for waste collection.  It however shared strategies being employed in the management of waste at the Bakoteh dumpsite.

Another presentation was on the OMVG energy project and the Sambangalo dam.  The President was briefed on the state of the energy project and its plan to provide electricity in rural Gambia.  President Barrow is the current chairman of the OMVG and its members are The Gambia, La Guinea, Senegal and Guinea Bissau.

Other comments ranged from the cross sectoral issues relating to agriculture, fisheries and the environment and their linkage with the tourism sector.  Vice President, Fatoumata Tambajang advised of on mainstreaming gender in the sectoral programmes and policies. The briefing continues on Friday at the State House.