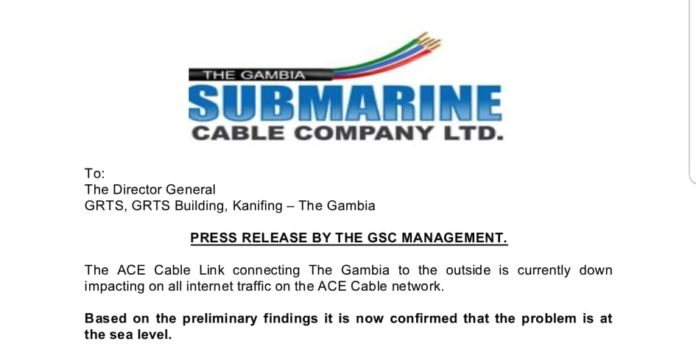 Internet went down in the country on Thursday leaving citizens in a state of disappointment.

The internet went down at around 6pm on Thursday and lasted for some time.

In a statement, the Gambia Submarine Cable Company said it confirmed that the problem was at the sea level after preliminary findings.

The company’s statement added: “The GSC, GAMTEL and ACE Cable consortium’s Network Operations Center (NOCin Dakar, Senegal) are closely working by carrying out series of tests (here in The Gambia and Senegal) to identify the exact location of the fault at the sea.

“After the identification of the exact location of the fault a Repair Ship would be mobilized to carry out a repair on the damaged part of the cable at the sea level.

“Through Gamtel and the other operators the country’s terrestrial traffic on the part of Senegal (as back up) is connected to ease the traffic congestion.

“The GSC and its entire membership, and on behalf of ACE Consortium apologise for the inconvenience caused.”