‘I had to come back to Banjul’: Darboe explains that he sustained fracture after he ‘tripped and fell’ 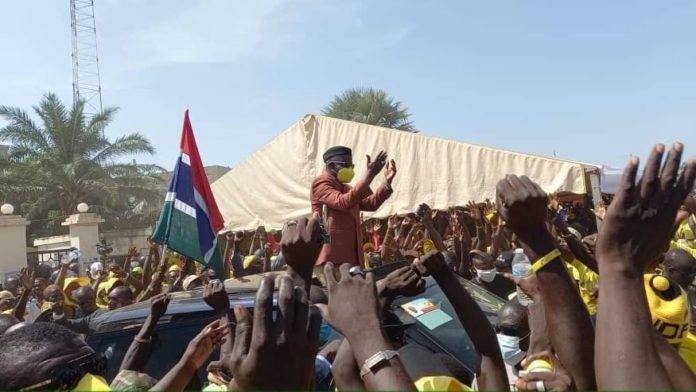 United Democratic Party leader Ousainou Darboe has told thousands of his supporters he pulled out of the campaign trail after falling and sustaining a minor fracture.

“Two days ago, I pulled out of the campaign trail because after performing the Asr prayers, while folding my prayer mat, I tripped and fell and then sustained a minor fracture. I couldn’t be attended to in the LRR in the manner I wanted medically. So I had to come back to Banjul to have better medical evaluation,” Mr Darboe told his supporters at his Pipeline residence early Friday.

UDP’s campaign contingent returned to Banjul on Thursday after ending the first part of their presidential campaign.

It however saw Mr Darboe missed the big return after spending a day at Afrimed hospital.

“My compatriots, I am humbled yet by another rapturous welcome by the members of this great party. This welcome of the campaign team has been made possible by your devotion and your dedication to the United Democratic Party,” Mr Darboe told his supporters.

Share
Facebook
Twitter
WhatsApp
Linkedin
Viber
Previous articleElection: Poll shows National People’s Party beating UDP and others in all regions of the country in terms of voters who shared who they believe will win the election
Next articleA Week to Election: Gambia Interfaith Bodies Call for Peace

‘The Tasks Ahead Are Many, Complicated and Difficult’-Barrow Acknowledges; But Reaffirms His Commitment to Tackle Them

“Holiday On Wednesday January 19 Is Only For Schools In Region...

“Keep Off The Tintiba Shooting Range On Thursday January 20” –...

First In History: All-Female Squad To Officiate A Match At Afcon