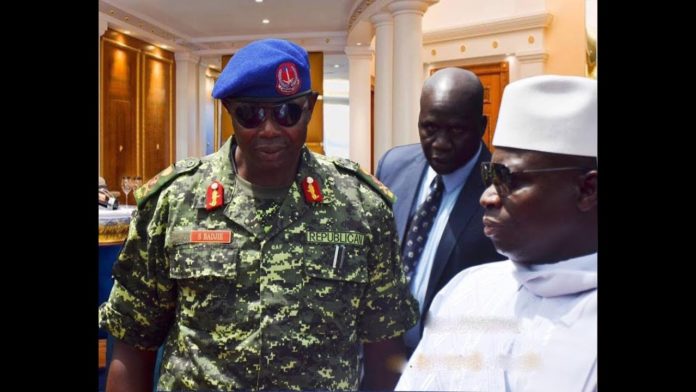 Generals Umpa Mendy & Ansumana Jammeh both very close associates of former dictator Yahya Jammeh have arrived in The Gambia according to sources. The two generals who accompanied Jammeh to Equatorial Guinea last year are back in the country but reasons for their return is still unclear.

General Umpa Mendy was the Principal Protection Officer of Jammeh whose loyalty to the former dictator was unquestionable. He was once removed but quickly reinstated before word about his firing got out. General Mendy is said to be very loyal to Jammeh and would go to any extend to do anything in putting a smile on his face.

General Ansumana Tamba, served twice as Commander of the State Guards battalion. Up until last year, he was the only heavy weapons specialist of The Gambia Armed Forces. He too accompanied Jammeh to Equatorial Guinea when he left last year on asylum. General knows the state house in and out.

Sources say the two landed at the Banjul International Airport, went through security and passport control without any questions. They are said to have been arrested few hours after they got home and met with their families.

A security source told The Fatu Network that the two are currently held at the Yundum Barracks military police section awaiting questioning.

“This is a big security lapse on the side of The Barrow administration. How can Umpa and Tamba enter the country without anyone noticing until they got home?” A source asked.

Photo: Umpa in suit with Jammeh and General Saul Badjie