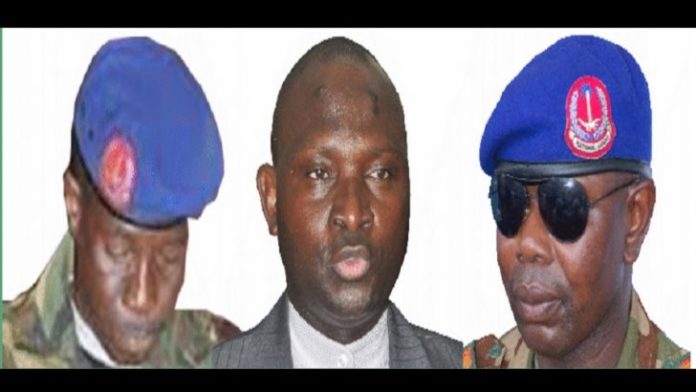 Following the security lapse that resulted in the entry into the country of Jammeh’s top loyal military men from exile, the security authorities have collaborated to produce what they called the country’s ‘most wanted 36’.

According to security sources, this list has already been distributed to various border posts and entry points in the country, in a bid to avoid the repeat of the recent airport incident. The list comprises names of home-based suspects being investigated for alleged crime and those outside the country, sources stated.

“It is true that generals, Tamba and Mendy have entered the country with diplomatic passports that they held before they went into exile. But these were not passports issued recently,” a top immigration official maintained.

“It has been a security lapse on our side, we admit that. However, the person they interacted with more was the officer in-charge of operation at the airport, Lamin Jatta,” a top intelligence source stated.

Jatta was not available for comments as he was suspended from active duties pending outcome of investigations.

The intelligence authorities meanwhile decried concealment of information from them hence the slippage into the country of the army generals without apprehension. “We the SIS were never notified… this is why our men on duties did not take any action,” the official stated.

“The officer commanding SIS Airport post, Gassama and agent Kinteh both faced suspension pending the outcome of the investigation…This is the consequences of concealment of information among the country’s security setup,” our security sources said.

“If the state informed us that these people are wanted, our men would have arrested them on sight,” our intelligence sources maintained.

Lamin Jatta, Gambia Civil Aviation Authority’s Operations commander (now on suspension) was alleged to have facilitated the smooth movement of the suspects in and out of the airport.

Meanwhile, would this have been averted with the investment of millions of U.S. Dollars in the biometric infrastructure and software by The Gambia in 2009, was the question I put to Draman Touray, Gambia’s foremost software engineer and biometrics specialist.

At his office on Atlantic Boulevard, Touray called his databank administrators to illustrate how The Gambia Biometric Identity System (GAMBIS) would have flagged anyone whose information was captured in the over 800, 000 persons.

“The project is the world’s first integrated Biometric Identity Management System. Through this system, the government of The Gambia was capturing biometric details for all citizens and aliens in the country,” Touray stated.

System administrator, Mr. Jah, wearing a long-sleeved white striped shirt with blue tie brought his laptop computer into the conference room and connected a cable to a 46-inch LCD Sony TV mounted on the wall.

This reporter was asked to produce his National ID card, whose NIN (national Identification number) was inserted into a search box in the GAMBISdatabase: There, all my details, including thumb prints; who processed my ID card application and who approved it backin 2012 all appeared.

“With this, no one will leave or come into the country without their necessary details showing…. But the system is not in the hands of the country’s security authorities,” Jah explained.

“We are an indigenous Gambian company that built this system, trained immigration officials, software engineers at the University of the Gambia, among others investment all at the tune of D402 million…,”Draman Touray, who studied Mathematics and Computer Science; and had a career at Goldman Sachs, JP Morgan and Morgan Stanley before coming home to invest.

“The ongoing programme, which was inaugurated on 23 July, 2009, aims to digitally record the biometric details of all citizens and aliens in the country. The reason for the project is to enhance the security of identity documents in order to facilitate commercial, legal, financial and governmental transactions around the nation,” Touray explained (see full interview this week).

As part of the ongoing investigations, a fact-finding team was dispatched to the airport last week. “Umpa Mendy and Ansumana Tamba and others came in as normal passengers, with the Gambia diplomatic passports,” our security source said.