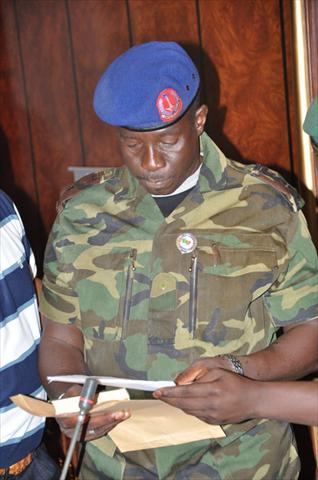 Lieutenant Colonel Solo Bojang, a former military commander of the Kanilai Battalion and a close aide of former President Yahya Jammeh has allegedly escaped after an arrest warrant was issued by a lower court in Banjul for his arrest.

According to family sources, officials of the National Intelligence Agency NIA came to his (Bojang) house but he was nowhere to be found.

“The Agents conducted a thorough search in the house including the neighborhood but could not see any sign of him,” said a family source.

Lieutenant Colonel Bojang who was a one time farm manager at the former President’s home village is accused of taking part in the killings of former veteran journalist Deyda Hydara, former NIA Director General Daba Marenah, WO2 Alpha Bah, Ebou Lowe, Manlafi Corr and others including Ndongo Mboob.

“Many of us were very shocked when we heard the news about the crimes committed by a member of our family,” a source revealed.

In 2009, Bojang headed a group of ‘witch hunters’ assigned by the former President Jammeh to arrest ‘witches’ forcing them to drink concoctions causing hallucination and death of several people in the country. Up to 1000 Gambians were kidnapped by ‘witch hunters’ and forced to drink hallucinogenic potions at secret detention centers. The exercise caused several deaths, health complications among others.

Bojang was held in detention by his former boss until President Barrow who pardoned all political detainees including him came into power. He then reunited with his family in Jalambang village in the outskirt of Brikama. He later moved to an undisclosed location.

“Few days after his relocation, we heard his name being mentioned in court that he was part of those who killed Ndongo Mboob of Foni,” a family source said.

It could be recall that Lieutenant Colonel Solo Bojang was arraigned before Brikama Magistrate Court on 12 April 2014 and charged with three counts, ‘Abuse of Office’, ‘Theft’ and ‘False Information’. He was acquitted and discharged with all the counts except the last count and was given a fine of D50, 000. He was rearrested and whisked away by security officers.