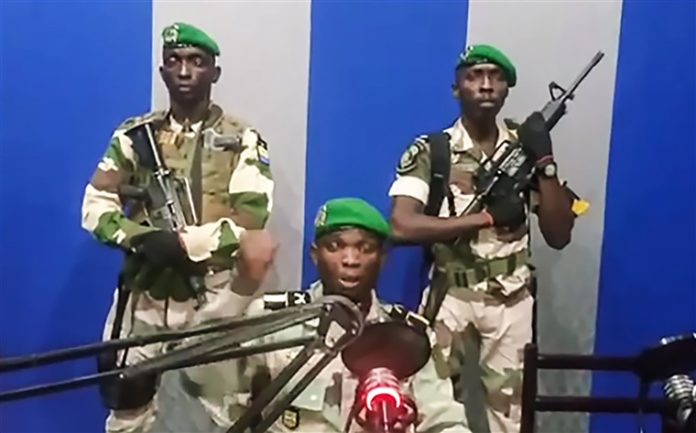 Soldiers in Gabon have attempted a coup, announcing the establishment of a “restoration council” after taking over the national radio station.

But the communications minister later on Monday announced most of the renegade military officers had been arrested and the situation was under control. There were still reports of shots being fired in the capital, Libreville.

Reading out a statement, the officers condemned President Ali Bongo who addressed his compatriots last week from Morocco for the first time since reportedly suffering a stroke in October.

A New Year’s address by Bongo “reinforced doubts about the president’s ability to continue to carry out of the responsibilities of his office”, said Lieutenant Kelly Ondo Obiang, leader of the self-declared Patriotic Movement of the Defence and Security Forces of Gabon.

“Once again, one time too many, the wielders of power deceptively continue to instrumentalise the person of Ali Bongo Ondimba, a patient devoid of many of his physical and mental faculties,” said Ondo Obiang.

Gunfire in the capital

Gunfire was heard around state television offices in the centre of the capital at about 6:30am (05:30 GMT), and military vehicles blocked access to the site.

Most of Libreville remained calm later in the day but there was a strong police and military presence on the streets and helicopters circled overhead.

A crowd of about 300 people had gathered at the radio station in support of the attempted coup, but soldiers fired tear gas to disperse them.

Bongo, 59, is said to have suffered a stroke on October 24 while visiting Saudi Arabia and has since been treated in Morocco. His family has ruled the oil-rich Central African nation for nearly half a century.

The president posted a video message recorded in Rabat and distributed via social and traditional media last Monday in which he admitted he had been “through a difficult period”.

But he added: “Today, as you can see, I am preparing to meet you again soon.”

Presidential spokesperson Ike Ngouoni later told AFP: “This speech is proof that President Ali Bongo is fully recovered. His health problems are now behind him.”

In a video circulating on social media, Ondo Obiang is seen in a radio studio wearing military fatigues and a green beret as he reads the statement. Two other soldiers with assault rifles stand behind him.

Ondo Obiang said the coup was being carried out against “those who, in a cowardly way, assassinated our young compatriots on the night of August 31, 2016” – a reference to deadly violence that erupted after Bongo was declared the winner of a disputed election.

A source close to the government told Reuters news agency the plotters appeared to be a small group of soldiers.

Government spokesman Guy-Bertrand Mapangou said four of the five officers who attempted a coup had been arrested.

“Calm has returned, the situation is under control,” he said. (Aljazeera)