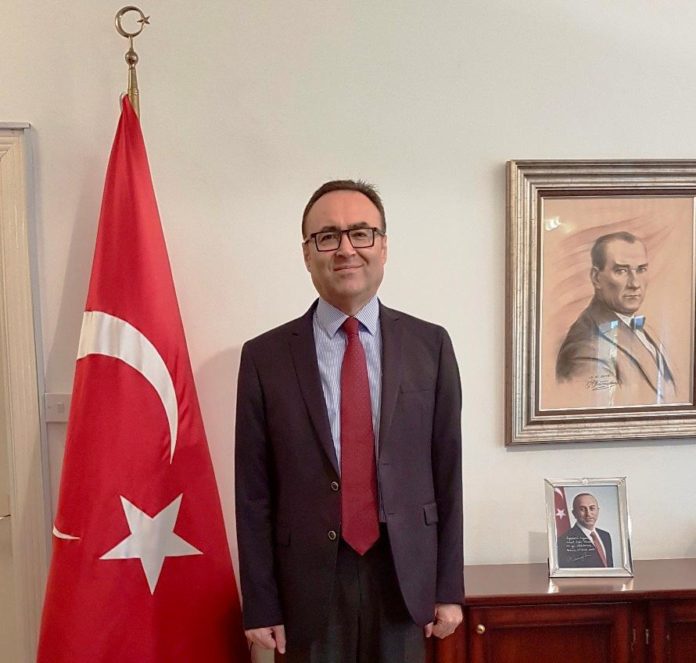 Honourable Speaker of the National Assembly,

Members of the Diplomatic Community

It is a great honour and pleasure for us to host such a distinguished community as we are celebrating the 96th anniversary of the founding of our republic with great honor and joy.

On this occasion, I would like to commemorate with deep respect and high appreciation our martyrs who sacrificed their lives for our country and made it possible that today we could proudly celebrate the 96th anniversary of the establishment of our republic.

The Republic of Turkey was founded on the 29th of October 1923 under the leadership of Mustafa Kemal Atatürk. His vision for a prosperous and democratic country, a country with full independence in all spheres, still guides our whole nation.

Turkey is located at the crossroads of different regions, regimes, civilizations and countries. Our heritage, social and political harmony, political, economic and social development enable us to steer through the major challenges of our region.

Therefore, traditionally turkey has been following a multifaceted foreign policy throughout the years.

Pursuing this approach, turkey has made significant contributions to peace, stability and security in its immediate neighbourhood and globally at large.

The ongoing conflicts and terrorism with the involvement of foreign players and their accomplices in our region have very negative repersecussions and concomitant costs over the people of the region.

In this regard, the Turkish people in solidarity with turkish institutions have managed to cope with and survive all the existential threats and challenges posed directly by some external elements or indirectly by their heinous internal accomplices.

To be more concrete, we are continuing our fight against the reminants of Fetullah Terrorist Organisation (FETO) as well as other terrorist groups such as DAESH, PKK, PYD and YPG which continue to pose serious threats to the security and stability of our neighbourhood and people. At this particular juncture, i would like to furnish you with some background information regarding operation peace spring targeting the terrorist elements in northern syria. Due to the Syrian regime’s assaults and these terrorist organisations’ henious attacks on the innocent people of Syria, the PKK, PYD and YPG terrorist elements, capitalising on the power vacuum in Syria, illegally occupied more than 32% of the Syrian territories. Simultaneously, the PKK, PYD and YPG terrorist groups, displacing millions of innocent civilians from their homelands, also changed the demographic structure of the region. At present, Turkey hosts around 4 million displaced people from Syria.

The Republic of Turkey, from the outset of the Syrian problem reiterated time and again its respect for the territorial integrity of Syria. Turkey also firmly stated that it will not tolerate a terror corridor along its border with this country. However, the PKK, PYD / YPG, terrorist elements, under the pretex and pretension of fighting against daesh, kept on their dastardly attacks on the civilians in Syria and Turkish people on the other side of the border. Under these deteriorating circumstances and exacerbating security conditions on the Turkish-Syrian border, turkey, on the basis of international law and in accordance with the UN Charter Article 51, has used its right of self-defence and has launched operation peace spring on 9 October 2019.

The three main objectives of this peace operation are to wipe out the terrorist elements along our border with Syria, to enable the return of diplaced Syrian people to their homeland at their will and to ensure the territorial integrity of Syria.

Relations with Africa constitute one of the prime orientations of Turkish foreign policy.
Atatürk’s motto “peace at home, peace in the world” is also reflected on the Turkish policy of partnership with Africa, which is based on reinforcing mutual gains and joint economic interests in bilateral relations.
In this context, our approach to Africa is one of equal partnership, and is best captured in the African proverb which says: “when spiders unite they can tie down a lion”. For Turkey, relations with Africa remain a key priority.

As a reflection of our strategic cooperation with the African continent, Turkey will host the third Turkey-Africa partnership summit in 2020.

Turkey and The Gambia have friendly and brotherly relations, based on a long and deep-rooted past.

Following the mutual opening of our embassies in Banjul and Ankara, the relations between our two countries keep on growing, and diversifying in all spheres on the basis of friendship and brotherhood.

All the year round, reciprocal visits from public and private sectors of both countries, on various occasions further contributed to the already existing good relations between our two countries.

I would like to confirm once more that Turkey’s commitment to the people of The Gambia and the Gambian government has been further strengthened by the new era in The Gambia.

As you move forward to build the New Gambia, turkey will continue to support this new dispensation, represented by democratic and humanitarian values.

Another important aspect of our cooperation has been in the field of capacity building and experience sharing among institutions.

Turkish government has been actively involved in the capacity building of Gambian institutions and providing aid in kind.

Turkey, in terms of development cooperation, particularly through the Turkish Cooperation and Development Agency (TIKA) and other Turkish non-governmental organisations, has been continuing to conduct aid and assistance projects in The Gambia,

Availing of this opportunity, I would like to announce that my tour of duty in The Gambia is coming to an end within few weeks. Having spent 3 years in the gambia, based upon my experience and observations in the country, I could conclude that The Gambia could be more hopeful for the future than when I arrived in late 2016. Like all my colleagues from the diplomatic corps who arrived before 2017, I also witnessed the smooth and peaceful transition of the country to democracy.

As a matter of fact, under the wise leadership of H.E President Adama Barrow this country made great strides in many fields during the last 3 years. As a long time friend of The Gambia, Turkey from the very first day of the change in the country gave its utmost support to the government and people of The Gambia. Actually, this support manifested itself in concrete programmes and projects financed by Turkey. Our logistical support to the Gambian army, capacity building programmes extended to The Gambia Police Force, Health, Fisheries and Agriculture ministries, local administrations and scholarships provided by the Turkish state and private universities to the Gambian students are some examples of this ongoing cooperation.

I am proud to share that The Gambia is a true friend in Africa and that the Gambian people are brothers and sisters of the Turkish people. In other words, Turkey has been and will always be a trans-continental brother of the Gambian people.

On this occasion, while bidding farewell to all the distinguished guests present here, I would like to extend my sincere thanks and appreciation to all the honourable ministers and officials of the Gambia government as well as my colleagues from the diplomatic corps. Along with that, I also wish to thank my colleagues at the embassy for the good work through these three years.

Thank you all for joining us on this happy occasion.