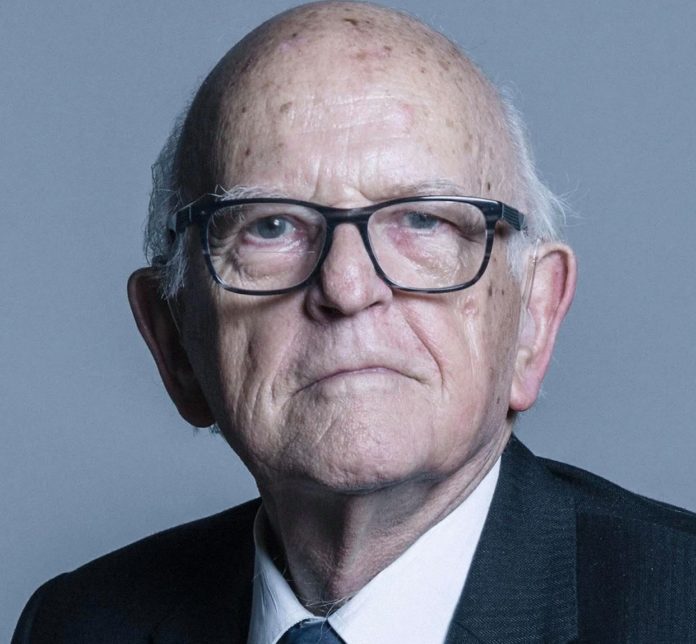 The death of Frank Judd leaves the world a considerably poorer place given his extraordinary, committed and passionate career both in the international development charity sector as onetime Director of International Voluntary Service (IVS), Voluntary Service Overseas (VSO) and Oxfam and in the world of politics as Labour MP for Portsmouth West, Parliamentary Private Secretary to Harold Wilson, and Secretary of State for the Navy, for International Development and Foreign and Commonwealth Affairs in the Callaghan Government.

It is no exaggeration to say that Frank had the greatest influence on and provided more support for my life, particularly in the field of international development, than any other of my many friends and colleagues.

I first met Frank in 1982 soon after a group of us in my community of Marlborough in Wiltshire, in response to the publication of the Brandt report (North South – A Programme for Survival), had created the Marlborough Brandt Group one of whose aims was to bring the issue of the importance of international development to the wider public. We invited Frank, at that time Director of VSO, to speak on the subject to a large audience in Marlborough Town Hall.

I remember, prior to his captivating lecture, discussing with Frank an idea that we were developing, to form a partnership for mutual learning between our community and a community in the developing world.  His passionate response was “Go for it!” This became the catalyst for the close relationship that subsequently developed between Frank and Chris and Kate, my wife and myself.

That relationship was reinforced by my time as a trustee of Oxfam while Frank was the Director from 1985 -1991.

Frank became a vital supporter and Patron of the partnership between Marlborough and the predominantly Muslim community of Gunjur in The Gambia and in 1993 came with a small group of us to Gunjur, living with a family in that community without access to electricity, piped water or proper sanitation, having to squat over a hole in the ground and wash from a bucket of water carried by women in the compound from a nearby well. In writing about the experience, and this I believe demonstrates Frank’s commitment to international peace, prosperity and justice, he wrote :-

“I was moved and invigorated by the week in Gunjur. Twinning of this sort, if it can avoid bureaucratisation and retain its spirit of spontaneity and directness, has an immense contribution to make in both the South and the UK and to building the real sense of international community so urgently needed if the threatening clouds of nationalism, exclusivity, ethnic cleansing and the rest are to be rapidly dispersed”.

At a meeting he arranged for us in 1995 with Joan Lestor, Shadow Minister for Overseas Development Frank spoke saying “In every dimension of life, the inescapability of interdependence is more obvious than ever. Yet paradoxically, too often our formal politics becomes more parochial than ever, totally failing to accept the challenge. The linking movement is significant evidence that people are leaving their political leaders behind – they are getting on with the exciting task of building a global community. It’s a trend that deserves all possible support”.

Frank continued to provide vital support through, in 2001, the setting up, and participating in regular meetings of the All Party Parliamentary Group “Connecting Communities” giving us access to key politicians. For example, Charles Clarke then Secretary of State for Education who became committed to the development of partnerships between schools in UK and in Africa and Asia in particular and Clare Short Secretary of State for International Development who put considerably funding into the development of these partnerships.

In 2007 Frank chaired a vital meeting at Marlborough House, the Headquarters of the Commonwealth with Nobel Peace Prize laureate Archbishop Desmond Tutu at which the Archbishop launched a recently published Toolkit for Linking communities.

But while all this amazing international work was being undertaken, Kate and my close relationship with Chris and Frank was developing and included regular holidays in the Dordogne, France and latterly in Anghiari, Italy while Chris and I were members of the Parliamentary Choir and performing in that lovely medieval, hilltop town in Tuscany.

We have meanwhile paid frequent visits to our homes in Thackthwaite and in Marlborough. Visits to Thackthwaite included glorious walks in the hills of the Lake District which sadly became fewer and shorter as Frank became increasingly disabled. But he retained his great sense of humour and was a constant source of fun. And there was always the lovely garden, with its red squirrels, in which to relax and share a cup of tea or glass of wine or sit in the glorious field alongside the garden with its mixed plant and wildlife and views over the hills.

Frank was a committed Christian of Scottish Presbyterian background and an annual event in our calendar was to attend a performance of Bach’s St Matthew Passion at the Royal Festival Hall given by the London Bach Choir conducted by the late Sir David Willcocks and more recently by David Hill a recording of which accompanied him as he lay dying in hospital.

It has always been clear to us that the role Chris played in Frank’s political and social life was absolutely central and that without her support, which he would be the first to accept and pay tribute to, his achievements would have been drastically diminished.

In paying tribute to Frank for his charisma, his passion for social and international justice and the huge contribution he has made to making the world a safer, more peaceful and just place for us all, let us also remember at this sad time Liz and Pippa and their families and in particular Chris for the care and love she has demonstrated throughout the sixty years of their marriage and, more recently, coping with his increasing disabilities.

We understand the grief and huge sense of loss that the family must now feel following Frank’s death, and which we all share.