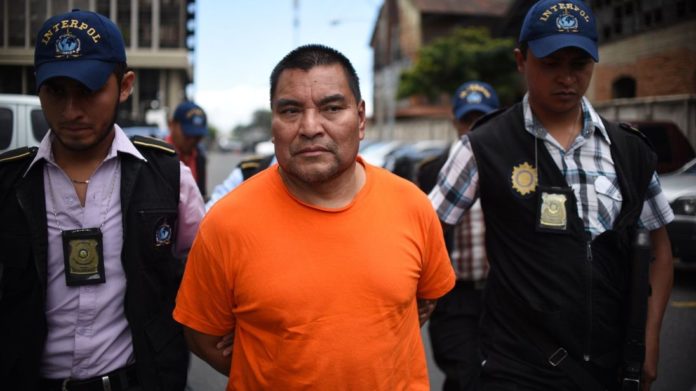 A former soldier has been sentenced to more than 5,000 years in jail for his part in a massacre by the army in Guatemala.

Santos Lopez Alonzo was accused of belonging to the Kaibiles, an elite squad of troops which murdered residents in the northern town of Dos Erres in 1982.

The 66-year-old was deported from the US in 2016 to face the Guatemalan court where he was found “responsible as author” of 171 of the killings.

He was sentenced to 30 years for crimes against humanity and another 30 years for each of the 171 people, although the sentences are symbolic as the maximum someone can serve in Guatemala is 50 years.

He had also kidnapped and adopted a five-year-old boy, Ramiro Osorio Cristales, after the boy’s family had been killed in the massacre. Mr Osorio Cristales was one of those who testified at Lopez Alonzo’s trial.

According to a report of the trial from the International Justice Monitor, a forensic expert told the court that 171 human remains were recovered from a well in the village, where the military had thrown many of their victims.

Forty percent of the bodies in the well had been children aged under 12, the expert said.

Prosecutors said most of the victims were killed with sledgehammers.

Former Peruvian general Rodolfo Robles testified as an expert on military doctrine and structure and he told the court that the army unit, which consisted of 60 men, had acted in a planned and coordinated manner.

There was no evidence that any of the unit’s members opposed or tried to stop the killings, he said in testimony reported by the monitor.

Lopez Alonzo also testified, saying he had been at the massacre but did not take part in the killings or other crimes that took place.

The unit had been trying to find members of a guerrilla group that had ambushed a military convoy but they failed to find the guerrillas or the weapons.

The Dos Erres massacre took place during the rule of dictator Jose Efrain Rios Montt, who was indicted on charges of genocide and died in April this year.

Lopez is not the first member of the unit to have been convicted over the massacre: a handful of others have received prison sentences of more than 6,000 years.

Some others are in US jails for immigration-related offences and many others are believed to be living free in the US. (SkyNews)