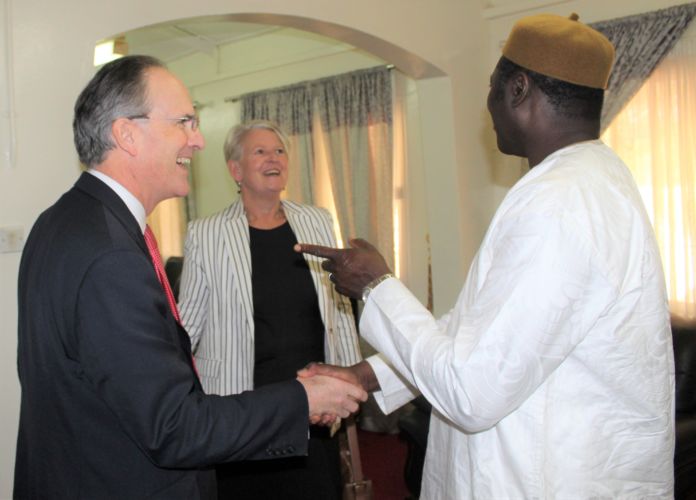 Mr. Parham was accompanied to the Foreign Ministry by the High Commissioner of the United Kingdom to The Gambia, Her Excellency Sharon Wardle. The Foreign Affairs Minister welcomed the Commonwealth Envoy and thanked Mr. Parham for the diplomatic engagement. Minister Tangara highlighted that the Commonwealth is not an organisation that imposes values on member states. However, the Minister suggested the need to reorganise and close ranks within Commonwealth. Minister Tangara further emphasised the need for increased presence of Commonwealth activities in The Gambia so that ordinary Gambian can feel the benefit of the organisation’s presence.

Dr. Tangara highlighted that the Foreign Affairs Ministry will use the forthcoming Commonwealth meeting in Kigali to strengthen cooperation with Rwanda with a view to learn from the success story of Rwanda. He indicated that Rwanda represents hope in terms of their experience and where the country is today.

For his part, Mr. Parham used the opportunity to remind the Honourable Minister of commitments made by leaders at the Commonwealth Heads of Government Meeting in London in April 2018. He hailed The Gambia as a great partner delivering on sustainability while calling for strong solidarity among Commonwealth member states.

It may be recalled that the former President Yahya Jammeh unilaterally withdrew The Gambia from the Commonwealth on 3rd October 2013.However, following change of Government in January 2017, the new democratic dispensation of President Adama Barrow facilitated the re-entry of The Gambia to the Commonwealth on 8th February 2018. Since then, The Gambia has been partaking in all major events and activities of the organisation.