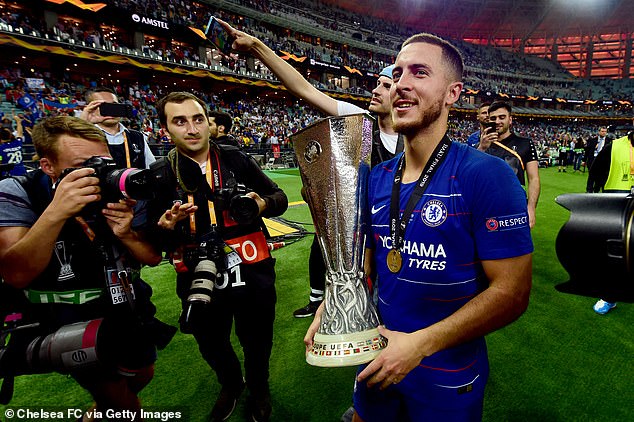 Eden Hazard is Real Madrid-bound after the Spanish giants finally struck a deal worth £130million with Chelsea.

Personal terms are set to be a formality for Hazard, who fulfils his dream of playing at the Santiago Bernabeu under his childhood hero Zinedine Zidane.

Real were determined to pull down Chelsea’s asking price for the 28-year-old but the deal is thought to be a victory for Blues deal-maker Marina Granovskaia with an initial fee of £88m rising to £130m with easily-attainable bonuses.

The fee will make Hazard the most expensive signing in Real Madrid’s history.

Hazard also only had a year remaining on his deal at Stamford Bridge.

Granovskaia was adamant about the price for Hazard despite him declaring he wanted to leave after that final.

‘I think it’s a goodbye, but in football you never know. My dream was to play in the Premier League, I did it for seven years. Maybe now it’s time for a new challenge,’ Hazard said.

He will arrive at the Santiago Bernabeu as manager Zinedine Zidane’s No 1 target in his summer overhaul. (DailyMail)