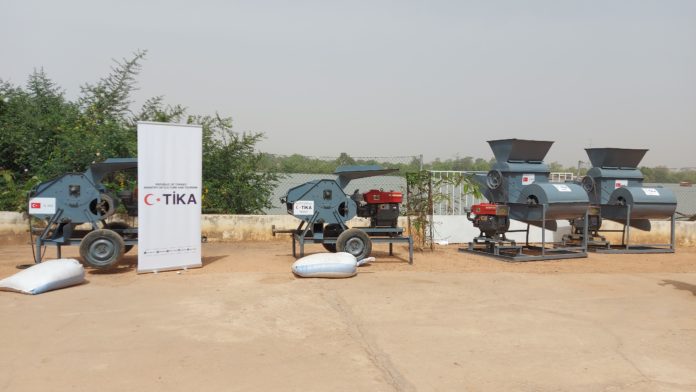 The Turkish Cooperation and Coordination Agency (TIKA) has given thresher machines to farmers in Central River Region.

In a colorful ceremony held on Tuesday, February 16, 2021, at the Governor’s office in CRR, TIKA handed over four thresher machines to the farmers in CRR through the Governor of CRR Abba Sanyang.

The Turkey embassy in a press release said: “The machines donated by TIKA will be used in processing groundnut and millet with the objective of mitigating post-harvest losses.

“The handing over ceremony was attended by the Ambassador of the Republic of Turkey to The Gambia H.E Tolga Bermek, Governor of CRR Hon. Sheriff Abba Sanyang, the Coordinator of TIKA Banjul Office Mr. Mehmet Akif Eyigun, chiefs of districts in CRR and the regional directors of agriculture and health respectively.

“In his speech, the Ambassador of the Republic of Turkey to The Gambia H.E Tolga Bermek reiterated the brotherly relations between Turkey and The Gambia which is bearing the fruits of strong cooperation between the two countries in many areas. He stated that TIKA has come up with this timely support in response to the hardship of the farmers in CRR. He went further to thank TIKA for this kind donation and hope that such support by TIKA will continue with a broader scope in The Gambia.

“In his remarks, the Coordinator of TIKA Banjul Office Mr. Mehmet Akif Eyigun stated that this was not the first time CRR is benefiting from TIKA’s support. He stated that under the Covid-19 Mitigation Project initiated by TIKA Banjul Office, CRR benefited from hand washing facilities, face masks, and food items. He finally thanked the Governor of CRR for the mutual cooperation and expressed his hope that the donated machines will be put into good use.

“On his part, the Governor of CRR Hon. Sheriff stated that before the coming of these machines, farmers in his region relied on machines coming from Senegal to thresh their groundnut and millet. He stated without any doubt that the thresher machines will ensure efficiency in the processing of groundnut and millet in CRR. Finally, he extended his profound gratitude to TIKA and promised that the donated machines will be handled with utmost care.”