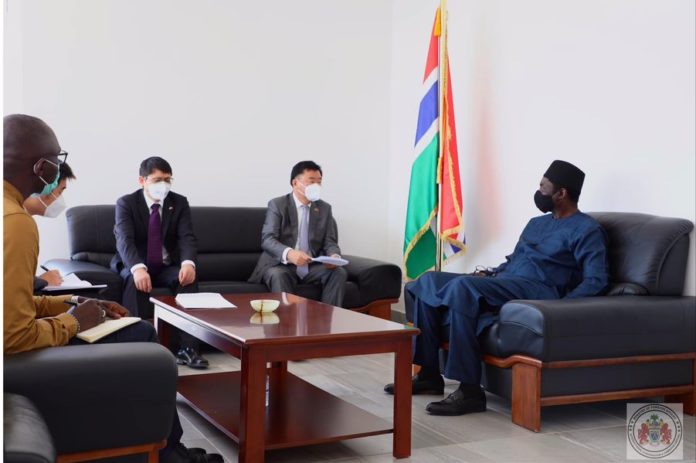 Dr. Mamadou Tangara, has held an audience with the ambassador of China Ma Jianchun in his office in Banjul.

Ambassador Ma was at the Foreign Ministry to present his country’s proposed initiative on partnership for Africa’s development within the context of the United Nations Security Council, the foreign ministry said.

According to the ministry, the initiative would be launched during China’s presidency of the United Nations Security Council and it is meant to support Africa’s development and post-COVID reconstruction.

“During her one month presidency for the month of May, China would use its presidency to call on the international community to support Africa in areas such as trade and investment, environmental protection, debt relief, food security, wealth accumulation, agriculture, agro-industry, sustainable development, infrastructure, energy and transport, scientific and technical cooperation, digitalisation and industrialisation.

“The initiative was presented to Foreign Minister Dr. Mamadou Tangara during a diplomatic demarche by Ambassador Ma and his team. Honourable Minister warmly welcomed Ambassador Ma and used the opportunity to extend heartfelt felicitations to his Chinese counterpart His Excellency Wang Yi,” the foreign ministry said in a news release.

The release added: “Minister Tangara hailed the initiative and expressed the commitment of the Government of The Gambia in strengthening bilateral cooperation with the People’s Republic of China for the mutual benefit of Africa and China. He described China as a dependable and reliable partner that always supports its partners in times of need.  The new initiative, the Honourable Minister indicated, would be crucial in boosting economic recovery efforts in the aftermath of COVID-19 pandemic that brought the world economy to its knees. The Honourable Minister said Africa and China would take stock of the framework that encompasses Forum for China – Africa Cooperation (FOCAC) in its next meeting in Dakar, Senegal.

“Minister Tangara recalled that since the outbreak started, the Government of China firmly supported Africa in fighting the pandemic. He added that this is evident with the multiple batches of medical supplies and anti-pandemic experience shared with African medical practitioners in containing the pandemic. He congratulated the People’s Republic of China for its victory against the pandemic.

“For his part, Ambassador Ma commended the Government of The Gambia and assured that China would continue to support the development needs of Africa and The Gambia in particular. He said greater cooperation would be done during the forthcoming Forum on China – Africa Cooperation (FOCAC) meeting due to be held in Dakar.”