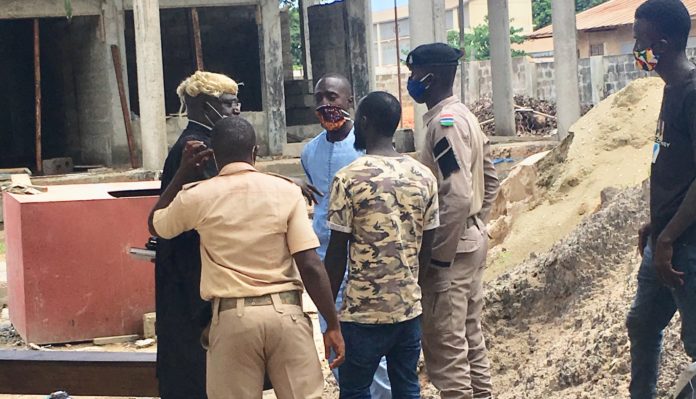 Bubacarr Keita’s attorney vowed on Thursday he would press a criminal case against any individual who tried to subvert the course of justice.

During Thursday’s two-hour session, respected lawyer Lamin Camara took a moment to complain that the first prosecution witness who is the accused person’s former wife was talking to her mother as the latter testified in the trial.

Camara said: “My Lord, can I raised something? Something serious is going on in the court. PW1 is talking to the mother from where we are and is prompting the mother. And this was the reason why I said the seat should be far away. And I’m not comfortable with that.

“This is not persecution. We are not here to persecute Mr Keita, we are here to prosecute Mr Keita with a view to finding the truth of what happened. We should be fair to him and we should be fair with the [alleged] victim. But we shouldn’t go the extra mile to try to prove the case by prompting the witness. That is unacceptable. And if I see anything like that again, I will be moving this court to a contempt hearing, a criminal case against any individual that tries to subvert the course of justice.”

The lawyer’s comments were met by a clap from a lady in the crowd but the judge quickly reacted that no one should clap in court.

“Madam you’re not supposed to be holding onto somebody, keep to yourself,” the judge then snapped at another lady who had placed her head on the shoulder of a man sitting by her.

The judge then said after asking the lady to move away from her mother: “I did not notice it, Allah knows that’s the truth. If I had noticed it, it could have been different. But since senior defence counsel has brought it to the notice of the court. And he has informed the court he would take the step of charging any such person for any further occurrence for contempt.

“If that happens, we will have no option than to try the person there and then. If anybody disrupts my court and I see you, I will just ask you out and you will not enter the courtroom again and that is if I’m calm. But otherwise I will try you myself for contempt immediately and if you are tried for contempt it means you may be taken to jail if you’re so convicted and sentenced.”

Binta Samura who was assisting the prosecuting lawyer Alasan Jobe then stood and said: “The state is deeply sorry and this is to apologise on behalf of PW2. But this is an issue that has been happening since yesterday. It’s not only on our side of our witnesses but you have other people that come to court and be making gestures.

“In fact I took it upon myself that today, if there is any of that sort it should be addressed. This is a court of law. As he rightly mentioned, nobody is here to persecute the accused person but instead prosecution should be done for the interest of justice.

“However, you can’t have counsel addressing and submitting and you have people talking or making gestures. I believe it’s a court of law and we should respect that. You can either listen or you avail us the door. But we apologise.”

And then the judge reacted: “Apology well noted. We want to say that this is the state’s case proceeding and gestures or occurrences might have been from the part of the state because it the witness of the state who has just been cautioned and has been moved from her seat and we accept the apology. But nonetheless any person who is found wanting for any breach we will try you for contempt.”