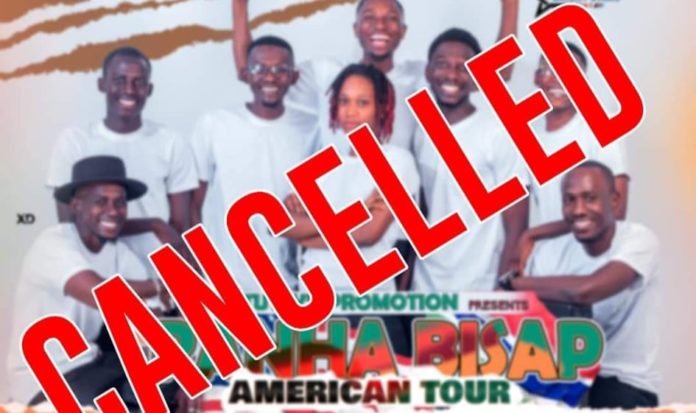 Bright Stars Entertainment have cancelled their tour of the United States after falling victim of a visa scam.

Bright Stars last month announced they will be touring the US.

This week, the comedy and music group issued a statement saying it is “with great regret that we write this official statement to inform you of the cancellation of this proposed tour.”

The group said: “After several investigations and consultation with the Public Affairs section of The U.S Embassy Banjul, we realized that the promoter of this tour, Tutty’s Promotions has presented to the Bright Stars team a fraudulent Visa confirmation letter.”

The founder of Tuti’s Promotions Tuti Wadda confirmed giving a visa confirmation letter to Bright Stars which she said it was given to her by her helper. She declined to provide the specifics.

Public affairs chief at the US Embassy Kathryn Edwards while confirming Bright Stars did reach out to the Embassy said the letter she viewed claimed to be from Ambassador Paschall and said that the recipients had received a visa.

She said: “The document was a complete fabrication.”

And she added: “Not only are visas not issued in this manner, the cited visa category was incorrect, and it said that the Ambassador was approving this visa on behalf of the U.S. Embassy in Dakar. As you know Ambassador Paschall is the U.S. Ambassador The Gambia and not Senegal.”

The US Embassy is working hard to help educate the public about potential scams, according to the top Embassy official.

“Just the other day someone reached out to the Embassy’s Facebook page regarding a message they received advertising the Diversity Visa Lottery Program.  They thought it was suspicious and asked us to confirm.  I was able to confirm that it was indeed a scam, provided the proper link to the program (which should open in October) and we also shared that information as a “Scam alert” on social media to help other potential victims recognize such fraud,” she said.