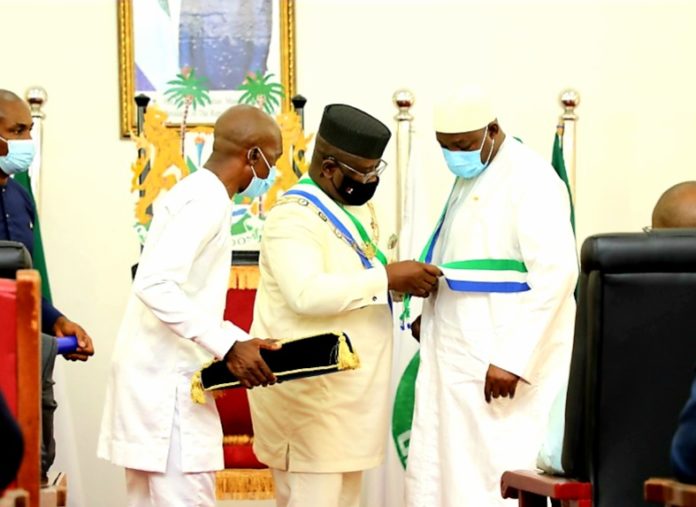 President Adama Barrow was awarded the Order of Grand Commander of the Republic of Sierra Leone, GCRS, State House has said.

President Adama Barrow joined Julius Maada Bio and other West African Heads of State as Guest of Honour to commemorate the 60th anniversary of the country’s Independence on Tuesday.

And as part of the celebrations, President Barrow was given the top Sierra Leone honor along with a host of West African leaders.

State House said in a statement Wednesday: “On the citation, President Maada Bio recognised and commended President Adama Barrow for promoting peace, rule of law and democracy in The Gambia, while undertaking Security Sector Reform.   He was also commended for his cooperation in addressing global issues and concerns at both the regional and global levels.

“Speaking on behalf of the recipients of the noble awards, the President of Ghana and Chairperson of ECOWAS,  His  Excellency Nana Addo Dankwa Akufo-Addo, described the noble gesture of the awards as an ‘exceptional act of consideration’ and hailed the historic role Sierra Leone contributed to educating West Africans and urged its citizens to reconcile as one people.”

“What unites us is more than what divides us, work together in the spirit of reconciliation, promote peace and Sierra Leone first before any other identity,” President Akufo-Addo emphasized, according to State House.

Share
Facebook
Twitter
WhatsApp
Linkedin
Viber
Previous articlePeople of Kiang have their say as they slowly put electricity misfortune behind them
Next articleBarrow in Sierra Leone: The president visits QCell Sierra Leone office – as he also meets Gambians living in the country