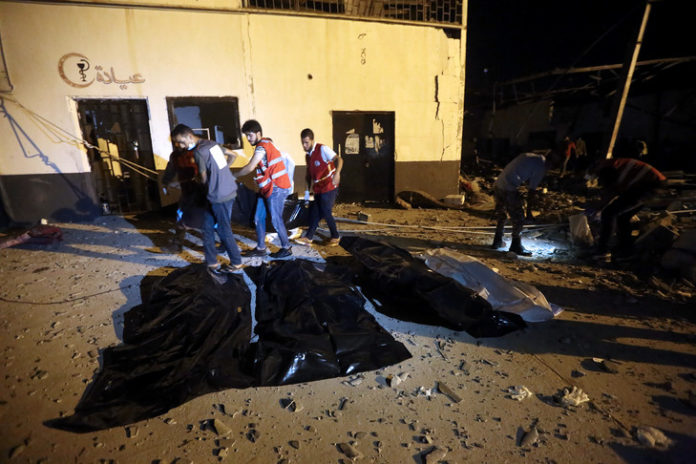 A migrant detention center in Tripoli, hit by a deadly air strike last week, is being gradually emptied following a decision by Libyan authorities to release its inmates, the U.N. refugee agency UNHCR said on Wednesday.

The July 3 air strike on Tajoura detention center killed 53 people and injured 130, according to the latest death toll from the World Health Organization.

The United Nations has said the strike on the camp, holding an estimated 350 people this week, could amount to a war crime.

The strike occurred as eastern forces under Khalifa Haftar keep up a ground and aerial offensive to wrest control of Tripoli from the U.N.-backed government. The two sides blame each other for the attack.

It left frightened migrants and refugees desperate to leave the center in an eastern suburb of the capital. The United Nations has also called for the migrants to evacuated to safety.

“At some point yesterday (Tuesday), a decision was taken by authorities to release the detainees. They were also given an option, they were not compelled,” UNHCR spokesman Charlie Yaxley said.

In all, some 260 migrants immediately left and walked to a UNHCR departure facility where they were allowed to stay overnight and given emergency assistance. They are expected to go to a community day center where they will receive food, water and medical care, he said. (Reuters)